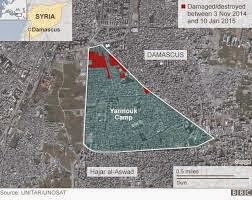 Brendan O'Neill recently pointed out the "callous double standards" of Israel bashers who say they care about Palestinian suffering but who appear conspicuously unconcerned about the fate of the Palestinians living in the Yarmouk refugee camp in Syria, where Islamic State, the Syrian Army (from the air), Hamas-aligned Palestinian groups and the al-Qaeda-aligned Al Nusra Front are turning things into (as a UN spokesman said) the deepest circle of Hell:

Where is the Twitter outrage? The talk of holding public protests? The angry articles by Palestinian solidarity activists? The discussions about sending aid to Yarmouk, as those preening politicians, authors and others did in relation to Gaza in 2010?

All these things are conspicuous by their absence. The deprivations of the Yarmouk Palestinians don’t seem to have pricked Western radicals’ conscience, certainly not in the way the Gaza war did last year.

What explains this double standard?

It’s because, today, what gets dressed up as “Palestinian solidarity” is nothing of the sort. This is no longer a movement devoted in any serious way to assisting the Palestinians; rather, it’s become all about demonising Israel, turning it into a whipping boy for the sins of history that right-minded Westerners can yell about and rage against and ostentatiously oppose.

Similarly, also conspicuous has been the BBC's under-reporting of this ongoing horror story - especially in comparison to its saturation coverage of anything to do with the Palestinians of Gaza and the West Bank, especially if Israel is somehow involved.

The daily updates on Today, Newsnight, PM, etc, the 'headline news' treatment of the latest developments on the home page of the BBC News website, features on From Our Own Correspondent, the twice-daily tweets of outrage from BBC reporters (most notably Jeremy Bowen and Jon Donnison), are not happening.

Part of this, of course, is because reporting from Syria is very dangerous for journalists, but that doesn't often stop a story from being reported, so isn't this BBC under-reporting also - pace Brendan O'Neill - a case of double standards? ("Israel cannot be blamed for this, so why spend much time reporting it?")

An honourable exception (the exception that proves the rule) must be made, however, for Lyse Doucet, who has been reporting the story for the BBC, almost single-handedly. I haven't watched or listened to any of her reports myself, but a search of the BBC website shows they do exist.
Posted by Craig at 11:22