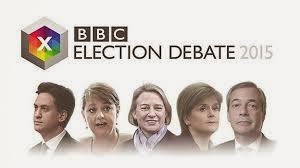 Still on the subject of that BBC debate and that audience...

The BBC's official response to complaints about the audience last night showing a left-wing bias runs (in full) as follows:

All the broadcasters and the political parties agreed that the appropriate way to recruit audiences for debates was to ask a respected independent polling organisation to do the job on our behalf. That was the case for all the debates in 2010, for the Clegg/Farage debates last year, as well as for both the debates during this campaign - ICM has an established track record of recruiting the audiences for all these debates.

We asked the polling company to work to proportions which take account of a number of factors in recruiting the audience - in other words, recent polling figures are only part of the equation. We also look at past electoral support, as well as the different party political make-up in different parts of the UK.

We set out clear objectives to ensure there is a broad range of political preferences - around 20% are undecided voters, from varying perspectives. The ratios then for those with a party preference are in the following ratios:

The aim was to recruit ordinary members of the public, not necessarily committed party political activists. As with any such audience, once assembled, we cannot dictate how it will participate - who chooses to applaud, or not to applaud, to agree or disagree with what different party leaders might say.

And, as per the Daily Mail, who do the fullest write-up I can find of this, here's ICM's response (as filtered through the Mail's reporting):

Independent pollsters ICM were hired by the BBC to select the audience of around 250 people.

After facing stiff criticism from Ukip, the firm today released a statement on how it chose the audience members.

They were selected from a 20-mile radius of the venue in Westminster. The region was broken up into 30 small areas, and at least 8 people were chosen from each area.

Each person was selected to reflect the 'composition of the UK population by gender, age, ethnicity, and social grade, and political protocols that reflected the balance as agreed between the broadcasters and the political parties', ICM said.

A fifth of the people declared themselves to be 'undecided voters'.

A 'small number' of SNP and Plaid Cymru supporters were brought in from Scotland and Wales.

ICM added: 'The recruitment approach replicated those used by ICM at all the 2010 leader debates, both the Clegg vs Farage debates last year, and the recent ITV debate.'

Mr Farage was widely considered to have won the debates against Nick Clegg last year, after which the Ukip leader made no complaint about the audience composition.

Earlier in the Daily Mail piece, the paper quotes ICM saying that they were "using random location selection techniques".

The two accounts - the BBC's and ICM's - may converge at a point as yet unseen, somewhere in the distance, but they seem to run on different tracks. The somewhat haughty-sounding BBC response doesn't really say what ICM are saying.

The BBC fails to mention the 20-mile radius around Westminster (famously out-of-step with the rest of England in the European elections as regards UKIP) and forgets to even hint at the bused-in supporters of Plaid and the SNP.

More questions need answering here - especially at the ratios the BBC produced seem so massively at odds with the audience's responses.

You might have expected that the SNP had a ratio of 9 to the Conservatives' -2 and UKIP's -5 from watching that debate.

And, as Peter noted on a previous thread, both ICM and the BBC had, by all accounts, to be dragged screaming this afternoon to finally offer these justifications.
Posted by Craig at 20:47