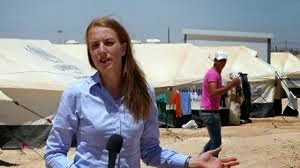 Fellow veteran BBC bias watchers (if no one else) will doubtless be well aware that the BBC's Jeremy Bowen once called Egypt's Muslim Brotherhood 'moderate'.

(The BBC website article which confirmed him so doing was subsequently edited to erase the word 'moderate'.)

Yolande Knell, in her BBC website piece today about the decline of the Bros, at least has the sense to call the Brotherhood "relatively moderate", given that 'relatively' is a highly flexible adverb.

Yolande's piece, however, still doesn't seem to me to be particularly impartial. Please give it a read and see what you think, but I see an opinion piece semi-disguised as a report.

It's a piece which gives voice, via its 'vox pops', to the Brotherhood's aggrieved supporters.

That would be fair enough if the BBC reporter detached herself from their grievances and put them in context.

Alas, I don't think she does. Indeed, I think those grievances are pretty much reinforced instead.

And I hear dog-whistle comparisons being loudly blown between the poor, brutalised Brotherhood-voting "noisy, overcrowded Giza slums" and the Hamas-voting Gaza.

In the former an "iron grip" reigns that makes life, in Yolande's words, "extremely risky" for the Brotherhood-supporting locals, while the latter is a place of "mangled metal and rubble of homes destroyed in last summer's war with Israel" where Hamas flags "flutter defiantly" and where "ordinary people feel more isolated than ever".

The powers-that-be around the world are turning on the Brotherhood (by her account) and calling them terrorists. The 'vox pops' representing the poor, vulnerable, hard-working families of Giza and Gaza are saddened. A nice, "dignified" Jordanian Brotherhood guy is "deeply worried" too.

The article's sub-headlines are revealing, and reinforce the piece's message:

Yes, the first is placed in inverted commas (and there's no need to place the third in inverted commas), but the middle sub-headline is pure editorialising. Maybe, just maybe, the Sisi government in Egypt isn't 'a gain reversed' but actually a 'gain' for Egypt, and the world?

Yolande Knell's use of the  phrase "relatively moderate" has a point though (as suggested by those sub-headlines) - a point she clearly feels it's worth leaving hanging in her readers' minds at the close of her piece:

And what worries many is that just as the Muslim Brotherhood, the grandfather of Islamist groups in the region, is in decline, so fanatical ones - like Islamic State - are gaining momentum.

The danger is that efforts to suppress the Brotherhood could radicalise its younger supporters and help swell the ranks of the extremists.

Yes, the message seems to be: Hang onto nurse (Hamas and the Egyptian Brotherhood) for fear of something worse (Islamic State).

Personally, unlike Yolande, I'd very much prefer the world not to hang onto either and don't see why we have to.
Posted by Craig at 23:01