Watching seven contenders going through the motions, giving predictable and uninspiring mini party political broadcasts got boring, went on too long and ended with no detectable denouement.

Although she showed admirable debating facility Nicola Sturgeon has firmly established herself in our minds as wee Jimmy Krankie. 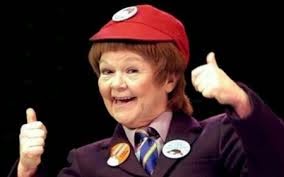 Plaid Cymru enunciated every word ever so carefully, in that English-as-a-second-language  fashion unique to extreme Welshness. It was compelling. Natalie B with her Australian vowels and unusually bell-like timbre had its own fascination too. 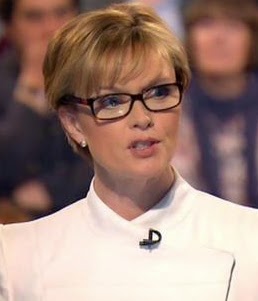 Others have remarked that the hostess was all got up as Anne Robinson. ‘Tonight Matthew, I’m gonna be’.... and a pretty good Anne she was too. They even used the Weakest Link set. The only prop missing from the show were the cards contestants twizzle round to reveal the name of the person they want to eliminate.  They should have stuck to that format. The walk of shame would have livened things up quite a bit.

The three blokes were the same as usual. Dave was Dave, Ed was Ed and Nige was a slightly pale imitation of Nige.

I don’t think we’re any further forward than we were before. There was one jarring moment, which the BBC has actually highlighted.

“Election 2015: Nigel Farage defends HIV comments.”
Strange to tell, I read a few comments below the line on the Guardian online defending the factual accuracy of Nigel’s HIV comments.

It may have been an unwise time and place to cite such a thing, after all, even though the discussion had been (technically) guided towards the topic of immigration, there was still a humungous elephant in the studio, which it became clear that no-one would dare to acknowledge, and the HIV thing was not necessarily the best way to finesse the immigration argument because it allowed the ladies to say what they said, as he undoubtedly knew it would.

“Scaremongering” “Stigma” “Shame on you”  enunciated Leanne carefully. As far as I’m concerned the jarring moment was the applause. Applause instead of engaging with the point. Wee Krankie compounded that when she said “when somebody is diagnosed with a dreadful illness my instinct is to view them as a human being, not consider what country they come from.”
Obviously if you take that argument to its logical conclusion you’d end up taking responsibility for the woes of the whole world, to the detriment of your nearest and dearest. It’s a completely undesirable and unworkable political proposition, and the haste with which she moved onto more familiar ground suggested she was well aware of that.

Others have jumped on the bandwagon. Operation discredit Farage. The more they do that, the more resolutely his supporters will support him. Probably.