Howard Jacobson on 'A Point of View'...and on Jeremy Bowen 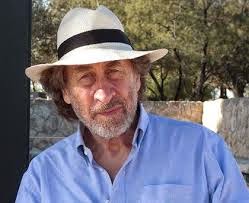 For many years Radio 4's A Point of View has effortlessly provided a clear-cut example of BBC bias.

Then, after over three-and-a-half years, along came Roger Scruton - the right-wing exception who (especially with the subsequent addition of further left-leaning guests) simply proved the rule.

Still, even though his politics evidently incline somewhat towards the Left, I'm definitely not moaning that novelist and Independent columnist Howard Jacobson has joined the A Point of View cast-list tonight.

Hopefully, he'll move onto some 'meat' as his 'Points of View' go on rather than discussing suits as he did tonight, but it was amusing tonight to hear his take on Evan Davis and those ill-fitting suits of his:

But Evan Davis was clearly to come over as more 'cutting-edge' than 'comfortable' and a cutting-edge suit must look as though it's cutting you in half.

That wasn't Howard's only comment on the BBC today though. His latest piece for the Independent, which touches on matters to do with the Israelis and Palestinians, also contains a BBC-related passage which bears repeating:

All talk of courage aside, may I suggest that the opportunity we think has gone could just be lurking in the debris of yesterday’s hopes. I happen not to think Netanyahu is a fool or a scoundrel. I understand the apocalyptic fears that drive him. People who say they want to kill Jews often mean it. When the BBC’s Middle East editor Jeremy Bowen called out Netanyahu for “playing the Holocaust card” during his recent address to Congress, he showed himself ill-equipped to report on events important to Jews. Were I to tell Palestinians to stop banging on about the Nakba and get on with enjoying occupation, I’d be called a callous fool. That which we will not imagine, we cannot speak of. A commentator who thinks the Holocaust is no more than the ace in a Jew’s deck of grievances is too cynical or too stupid to be listened to. Go quietly, Mr Bowen. You bring discredit to your profession.