"This audience, which is a remarkable audience even by the left-wing standards of the BBC"

Tonight's BBC One election debate featured a studio audience that appeared to bear little or no resemblance to the electorate it was meant to represent. It appeared to be strongly biased - even by the BBC's usual standards.

The opening discussion saw repeated applause for attacks on austerity and for calls for public spending. The UKIP leader spoke out:

Nigel Farage: There just seems to be a total lack of comprehension on this panel and, indeed, amongst this audience, which is a remarkable audience even by the left-wing standards of the BBC. I mean, this lot's pretty left-wing but...

David Dimbleby (interrupting): Hang on a second, let me just say one thing. This is an audience that has been carefully chosen...

Sky News tonight is leading with this intervention, and making out that Mr Farage was "rattled": 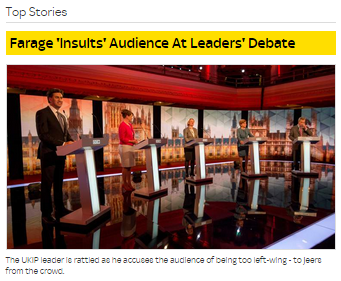 I have to say that I thought the UKIP leader may have taken on the BBC audience here deliberately, suspecting, as he indeed went on the say, that "the real audience is at home".

That "real audience at home" will have heard an audience that appeared, through its patterns of applause, (a) to strongly oppose austerity and strongly favour public spending, (b) to oppose the Conservatives' right to buy policy (c), to favour 0% private involvement in the NHS, (d) to want the Tories' trade union legislation repealed and (e) that was very keen to back speakers defending high immigration.

They'll also have heard an audience that applauded and often loudly cheered attacks on David Cameron and the Conservatives, and that either jeered at or received in stony silence much of what Nigel Farage said.

Most astonishingly of all, they'll have heard huge applause and wild cheers for Nicola Sturgeon's call for Labour and the SNP to get together and kick out the Tories.

Incidentally, the BBC's own 'worm' showed an interesting reaction from its sample of voters to Nigel Farage's attack on the audience - a somewhat approving one - as posted on the BBC's own live election feed: 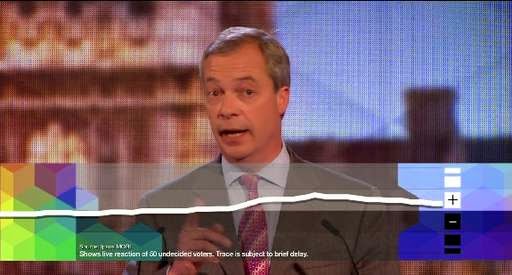 
Here's a flavour of some other reactions:

Tim Montgomerie on Twitter: 70% of Britons think immigration is too high. 90% of #BBCDebate audience claps defence of high immigration.

Breitbart London: 20:43  Is the audience balanced???
Format for tonight's debate: BBC Election Debate 2015: 4. There will be a live audience selected by a reputable polling company mainly from the surrounding region. That means they are from London, which is a separate BBC region to the South East (where UKIP is strong). UKIP does not do well in London, it is far stronger elsewhere in England.

Stephen Pollard on Twitter: If this audience is representative of the electorate I'm Natalie Bennett's speechwriter.

James Forsyth on Twitter: I expect Ed Miliband is now wondering about the balance of the audience as it whoops.

Janet Daley, Telegraph: The loser? Nigel Farage – because he completely lost it over the Left-wing bias of the audience (even though he was right, it was truly shocking even by BBC standards).

Tim Montgomerie on Twitter: Although Farage was tactically unwise to criticise the audience some very big questions for the BBC about audience selection #BBCDebate

Patrick O'Flynn, UKIP: The BBC ought to check that it wasn't skewed because of some systematic bias or failure and ought to be transparent about that - but I'm not saying there was a systematic bias but I think they should check and reassure those viewers who might be unhappy. I don't personally think it's going to to turn into a problem for Ukip, but were I the BBC I would think I'd be feeling a little bit awkward because it clearly seemed to be a very skewed to the left audience actually.