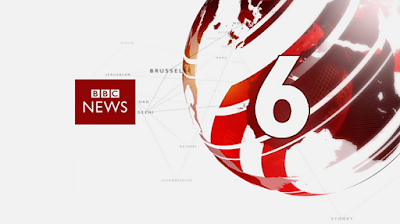 If you remember, three things are being counted.

The first measure is a simple comparison of the amount of time given to direct quotes from each side [actually clips of people speaking]. This has worked out as follows (with 'n/a' signalling no EU referendum-related feature or no direct speech):

That works out at:

i.e. nearly 3 minutes more for the Remain side - a startling imbalance.

Caveats are, however, needed. This (intentionally) ignores the content on what was being said. So if, say, Nigel Farage was slagging off other Leave campaigners rather than making a point in favour of Brexit or Barack Obama was telling the youth of Britain to remain outward-looking as regards the rest of the world without being completely explicit that he was meaning 'vote Remain', or if Mrs May was sending out mixed signals in a speech on security, well, it still all goes into those figures.

The second measure is whether the opening headlines favour one side or the other, That's been trickier to keep an eye on because quite a lot of the above (a) have featured in the headlines and (b) some of the headlines have done the 'someone says....but critics have reacted by saying' kind thing. So this have been refined to which side's angle comes first in either the headlines or the whole bulletin. Here's what's happened so far:

15/4 Remain [George Osborne warns that mortgage rates could go up if the UK votes to leave]
16/4 Leave [Boris tells Barack Obama to keep his nose out]
17/4 Remain [A French government minister saying Britain would have a much weaker hand when negotiating trade deals if it voted to leave the EU]
18/4 Remain [The United Kingdom will be permanently poorer, says George Osborne, if voters decide to leave the EU]
19/4 Leave [Michael Gove accuses the Remain side of scaremongering and using patronising arguments]
20/4 Remain [20/4 Eight former U.S. Treasury Secretaries have signed an article in the Times warning of the risk of Britain leaving the European Union]
22/4 Remain [Barack Obama's big 'back of the queue' warning]
23/4 Remain [Barack Obama implores the young not to pull back from the rest of the world]
25/4 Remain [Theresa May says we should vote to stay in EU for security but leave the ECHR]
28/4 Remain [David Cameron campaigning alongside former TUC boss Brendan Barber and calling for Jeremy Corbyn to join him]
29/4 Leave  [Nigel Farage criticises other Leave campaigners saying they aren't the right people to talk about the EU and immigration]

That works out as:

Two further things need adding to this though.

Firstly, the above list didn't feature another item which perhaps ought to have been included. The 30/4 bulletin featured a report from Joe Lynam on the sharp cut to mobile phone roaming charges in the EU. The move was shown as being (understandably) very popular with all the report's vox pops.The European Commission was credited as being responsible for this popular move. (Interestingly, this report was a toned-down version of one that had been running on the BBC's lunchtime bulletin where Joe Lynam had said "These price caps will only apply for a year. After that roaming charges will be scrapped entirely. But that applies to EU member states only. So it Britain votes to leave UK mobile phone companies could reimpose higher fees, unless, of course, the government put in place its own ceilings".) And that followed the 29/4 bulletin's focus on how the EU's deal with Turkey seems to be working with 0 migrants arriving on Lesbos that day.

Secondly, the above list shows that the BBC has been focusing on substantial points and warnings from the Remain side about what a Brexit might mean while, in contrast, focusing pretty much exclusively on the Leave side's personal criticisms of others (of Obama, the Remain campaign and their own side!).

The final measure we've been looking at involves counting up the number of debunkings (eg. from Reality Check) included in each bulletin. This has proved surprisingly easy as only two bulletins have included such a feature! The first was the 15/4 bulletin which debunked the Leave claim that we'd have an extra £350 million a week to spend on the NHS if we left the EU. The second was the 25/4 bulletin which looked at EU migration figures. This was less clear-cut as to who it favoured, though (to my mind) it was very much tilted against the Leave side as well.

Here's a transcript of it for you to make up your own minds (with a little colour-coding from me to 'help you mind your decision'!):

George Aligiah: So Britain's ability to control immigration is one of the big themes being talked about today. Our Home Affairs correspondent Daniel Sandford is here with me. Let's get this right. First, what's the position now. What are the numbers?
Daniel Sandford: Well, George, there's no doubt that the European Union freedom of movement rules have made a significant contribution to the numbers of foreign citizens choosing to come and live in the UK. They're not quite as big a proportion as you might expect. If you take British citizens out of the equation, then net migration into the UK was 363,000 in the year to September - that's the number arriving minus the number leaving. Both the Remain and the Leave camps agree that we can do nothing at the moment to control the number of EU citizens coming to live here, though we still do have border controls. We can still check on people arriving and also under EU rules we do have the power to expel people on security grounds, for example.
George Aligiah: All right, let's just look at the EU migration. What's the difference likely to be between a vote to Remain and a vote to Leave?
Daniel Sandford: Well, if the UK left the EU then in theory migration from the European Union could be completely stopped. However, presumably at the moment of leaving we'd want to do a trade deal with EU and when Switzerland, for example, did a trade deal with the EU they had to accept some of the EU freedom of movement rules. Now they have a much higher proportion of EU citizens living in Switzerland than we do, for example, of non-British EU citizens living the UK. They're trying to get out of that agreement at the moment but to do that they might have to abandon their trade deal. Also, would we actually say that no EU citizens - no German doctors, no Hungarian economists, no Lithuanian farm workers - could come at all to the UK? Presumably not. If the economy stayed strong then even if we left the EU presumably there would be some EU citizens still coming to the UK. On the other hand, if we remain in the UK then the freedom of movement rules will certainly stay, and with other countries like Turkey and Albania potentially joining the EU further down the line the pool of people who might want to come here could actually go up - unless we change the rules of course about new countries joining.

Very arguably then, the Debunkings tally is now:

Of Leave claims: 2
Of Remain claims: 0


All three measures then have suggested the same bias: Pro-Remain voices have been heard significantly more than pro-Leave voices and pro-Remain angles have led most of the coverage (and been more helpful to them); and the 'debunkings' have also tilted in the same direction.

All in all then, this does add up to quite a dramatic picture of BBC pro-Remain bias in action, doesn't it?
Posted by Craig at 11:30