Be away for even a day or two and you can soon lose focus, especially if a lot's been going on (and there's always a lot going on at the moment). Please bear that in mind as you read the following.... 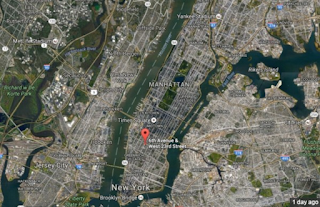 I saw a fair bit of the initial coverage of the Muslim terrorist attacks in New York, New Jersey and Minnesota over the last couple of days and raised my eyebrows when Bill de Blasio talked of the blast in New York being "intentional" before adding there was no evidence of terrorism. Then Andrew Cuomo said it was terrorism but there was no evidence of a foreign terrorism link. Then Andrew Cuomo said there now is evidence of a foreign terrorism link. Men of Somali and Afghan backgrounds are now the main suspects for the various attacks.

Like most people, I naturally assumed it would be Muslim terrorists but I found some of the speculative stuff being written elsewhere yesterday a bit troubling and - before having to rush out yesterday (hence the lack of post) - dashed off the following draft manifesto about how the BBC should cover such stories and what we should demand of them. (Please judge for yourselves whether it's half-baked or not):

When it comes to reporting attacks, terrorist or otherwise, I want the BBC to avoid speculating and simply to report all the facts as they come in.

I don't want their presenters or reporters to speculate in any direction about possible motives, simply to report what witnesses and officials say. I don't want them to start prematurely joining the dots either. And I want them to issue 'health-warnings' to any 'expert' guest who is obviously trying to spin a line, in whatever direction, based purely on guesswork.

The BBC, however, should always seek to test those official statements by investigating them for themselves, without fear or favour.

What the BBC should be criticised for is: (a) failing to report stories or reporting them reluctantly; (b) omitting or downplaying important details from such stories; (c) attempting to spin such stories in a 'BBC direction'; (d) indulging in one-sided speculation; (e) trying to change the subject (such as onto hypothetical 'backlashes').

The BBC has been guilty of all five of those charges on occasions (sometimes all at the same time) - as we've recorded at ITBB, ad nauseum (and beyond), many times before.

From what I've seen of it, they've done better this time (or, at least, no worse than anyone else). They've recorded developments quickly and, as far as I've been able to see, haven't sought to hide very much either.

They have struck me as behaving with scrupulous caution though.

Now, of course, their scrupulous caution might not have been so evident if there had been the slightest suggestion that someone who wasn't Muslim had done it.

You may recall, for example, Justin Webb and Evan Davis repeatedly speculating on Today (before the facts came in) that the Boston marathon bombings might be a white, far-right attack (one of the clearest examples of this kind of BBC reporting), or Newsnight eagerly reporting gossip (very soon after another attack when precious little was known) suggesting that the killer who later turned about to be Iranian-German David Ali Sonboly had shouted racist abuse at someone in an apartment block and, thus, might be a white, right-wing extremist (though it turned out that the racist abuse was being flung at Sonboly), or the BBC's swift and heavy reporting of the alleged 'Britain First' cries of the alleged murderer of Jo Cox in contrast to their reluctance to quote allegations of cries of 'Allahu akbar' in a number of (eg) French attacks.