I’ve read some peculiar things in the paper today. As I haven’t watched any TV for two days I thought I’d do a paper review, like Sky News and the BBC News channel. And Andrew Marr of course. I’ve only one paper here, which happens to be the Times, so I’ve invited myself to talk about that.

There’s a picture of Aidan Turner on the front page. He looks much less attractive without his Poldark hat. In this hatless picture he looks as though he might be wearing a man-bun. I recall that song: “My hat it has three corners, three corners has my hat” . I did like that song, with its metaphysical punch-line: “Had it not three corners, it wouldn’t be my hat.” 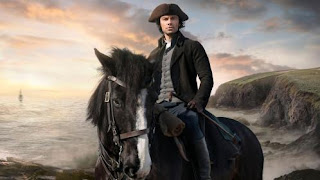 On page two, which is the page least likely to be read according to psychological algorithms (made that up) we learn that Theresa May has gone all Jeremy Corbyn.  The headline is: Hate crime has no place here, May tells Polish PM.  There are so many confusing aspects in there that I don’t know where to start, so let’s get the most trivial one out of the way.  I always read Polish as polish. I know that’s stupid.
Did Theresa May really say those actual words? If so, I’m disappointed. Couldn’t she think of a more original way to phrase that sentiment other than to appropriate Jeremy Corbyn’s unfortunate and meaningless  statement? “There’s no place” - here there or anywhere -  for whatever it happens to be that you don’t really like but  can’t be arsed to do anything about.
Also, it smacks of Royston Vasey. There’ll be no strangers hate-crime here. This is a local Britain now.

Next to Theresa and the Polish PM there’s something about Sir Cliff. “New Challenge!” So, did he or didn’t he? Rumours abound.

Oh good grief. Next, a full page spread, titled: Jeremy Clarkson blows up his own house. That set me thinking. I wonder if I could blow up my own house? I don’t know if the neighbours would like it, but I can see the attraction of starting afresh, without all the junk. Of course an explosion would create its own junk, but things often have to get worse before they get better. The road to minimalism is paved with rubble.

I’m not going to go through every page of the Times, but there is a little piece on page 6 about FGM. Cases of it are up in Birmingham. 120 new cases, so it says here.
Directly opposite that there’s an article about policemen in burkas. Police persons, I should say.

There’s a fetching illustration of a figure draped in black cloth with teeny slit to peer out of.
Under the heading “The Rules” it says:

“NHS. Many trusts have told staff that face coverings cannot be worn when dealing with patients in order to aid communication and minimise infection risks. Some allow staff to wear a veil during lunch.”

Some allow staff to wear a veil during lunch?  The mind boggles.  I mean, it boggles.

Pages 12 and 13 are about schools. I can’t go into detail at the moment you’ll be sorry to hear, but that does remind me.  Did anyone hear Any Answers today? Anita Anand had just got started when I had to get out of the car (I was listening in the car) to do a spot of shopping. When I came back, she was still on about grammar schools. I’m guessing that they devoted the whole half hour to that topic.

Although I barely heard any of it, I did wonder if Anita Anand is fit for purpose. I understood the role of anchorperson or chair is to let callers have their say, and if possible get rid of the boring ones, the  barking mad ones and downright offensive ones. A good anchor should be able to neatly sum up the gist of the call, perhaps give the caller a chance to come back if they want, and move on.

Anita Anand doesn’t seem to realise that it’s not necessarily her opinion we want to listen to, so she dutifully takes on multiple opponents single-handedly, battling with each of them in turn, or cutting them off if they say something she doesn’t like. She does it all in the most irritating voice. I don’t think she can help that, but one does wonder if she ever listens to herself on iPlayer - some thesps claim they never listen to or watch themselves acting, which may or may not be a good plan.

Page 15 has some stuff about the Archers. I gave up listening to the Archers years ago. Years and years.
At one time, if I accidentally heard it, e.g., I couldn’t get to the off-switch quick because I was in the bath, nothing much seemed to have happened, even if months and months had passed.

But nowadays I don’t know who any of the characters are, and I think some of the old characters are played by new actors. The storylines are awful.
A running ritual concerning The Archers  (here in Royston Vasey ) is the histrionic dive for the off-switch at the first peal of Barwick Green. Also, the occasional quip about Dan and Doris from someone who’s pretending he thinks the Archers is still the everyday story of countryfolk. Hilarious, eh?

Isn’t it annoying that the BBC creates so much ‘news’ about its own stuff? Bake-off, Strictly,  Poldark, and the wretched Archers.

Page 19 features Jeremy Corbyn again. It’s illustrated with a picture of him wearing a red head-covering whilst visiting a Sikh temple. Not a flattering look.The article says: Corbyn celebrates a year in office.  How is he celebrating, I wonder. In a tricorn, perhaps with a plume?

I’m not even halfway through the papers yet and I’m boring you already. Tomorrow there will be another massive bundle to plough through, including several extra bits, some of which go straight to recycling, unread. I do hope it’s pulped and properly refashioned into something really useful, that might go some way towards assuaging the guilt.
Posted by sue at 20:49