They say the Labour conference is to open with a rally against antisemitism.

Maybe they got the word ‘against’ mixed up with the word ‘for’?

Who is going to explain why Terence Kenyan has been readmitted after  a series of repulsive tweets?

What about the Corbynista that tweeted a vile comment about Shimon Peres? Has he been expelled?

Has Michael Foster been readmitted yet?

Meanwhile the BBC’s Norman Smith is getting excited about Jeremy Corbyn’s performance at PMQs. It’s almost as though the BBC has been waiting patiently for something to cling to that enables it to support a Corbyn-led Labour Party without alienating their core viewer. I suppose “Grammar Schools” is as good a bet as any.

They don’t seem keen on exploring the dark side so much. Here's a nice picture of Baroness Chakrabarti. 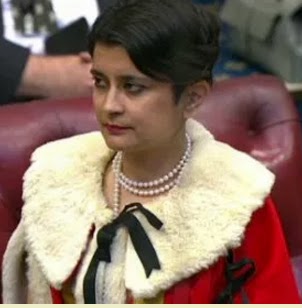 This terrible video is doing the rounds. (first spotted on Harry’s Place.)

order-order.com used to be full of mildly antisemitic comments itself. But nowadays the attitude expressed by commenter John Hunter is more typical of Guido's BTL comments:

“I used to be a lot more critical of Israel, and I used to believe there was a fairly simple two-state solution, because I used to believe the Arabs were acting in good faith. I still want to believe that, but the evidence tells me I'd be a fool to believe it, because I've seen that every concession Israel makes is met with more demands and more excuses not to negotiate.
They could have had peace ten times over if they wanted it, but they don't want peace, they want victory, and they won't be happy until Israel is wiped from the map. A member of Fatah central committee said as much on television recently, but as he said, they keep that to themselves, and tell the rest of the world a different story.


All you good-hearted western liberals who keep banging the drum for the poor Palestinians; I sympathize with you, because you're doing it for the right reason. But you're being exploited, just as the people in the West Bank and Gaza are being exploited, by people who have no intention of negotiating peace, because they're driven primarily by crude, irrational religious hatred. When you protest for Palestine, you know you'll be in the company of people calling for Jews to be gassed.


Despite what the Palestinian public-relations industry, i.e. the western media might tell you, this isn't about territory, and it isn't about justice or human rights, because Arab societies don't know the meanings of those words. It's about Jew-hatred, as mandated by the Qur'an, and as preached in the mosques and taught to the children in Arab countries, day in and day out, generation after poisoned generation. The Arabs don't hate Jews because of Israel. They hate Israel because of Jews.


In Europe, where it has become fashionable to use the Israeli government's behaviour as an excuse for the kind of open anti-Semitism we've become used to hearing from Muslims. At anti-Israel demonstrations in Europe you're likely to hear calls for Jews to be gassed. We've even had the spectacle of a Dutch member of parliament in the front line of such an event.


In Sweden, Israeli athletes can no longer even compete without being attacked by violent mobs because the police can't, or won't, protect them. Hate crimes against Jews outnumber those against Muslims, and many of them are carried out by Muslims for no other reason than they've been taught from childhood to hate Jews. Meanwhile, day in and day out, we have to listen to their endless hypocritical horseshit about Islamophobia. It's enough to make you want to throw up.

Public opinion? What does the BBC know.
Posted by sue at 15:41