“I beg to move, That this House has considered the BBC and political impartiality.”

Mr. Davies was concerned with the BBC’s bias, (to the political left) in particular its overtly partisan attitude to Brexit and its unscientific treatment of climate change. He also objected to the BBC’s habit of referring to extremists of the Muslim faith as ‘conservative’. 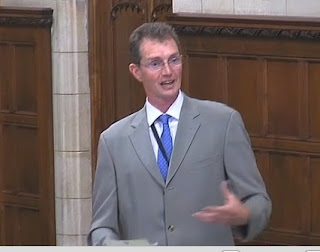 Maybe Mr. Davies doesn’t know a great deal about the BBC’s bias against Israel and its pro-Palestinian stance on all matters ‘Middle East’, but it was disappointing that the Minister of State (Department for Culture, Media and Sport) (Digital Policy) Matthew Hancock didn’t seem aware of it either.

“It is a great pleasure to serve under your chairmanship, Mr Davies. It is also a pleasure to address this incredibly important issue at an auspicious time, because the new BBC charter for the next period is due to be published tomorrow. The debate is important and timely, […]

I also agree with my hon. Friend on the importance of genuine impartiality, which is the nub of his speech and the purpose of this debate. It is worth briefly going through why impartiality is important and what is in place to ensure that it happens. As the charter review has shown, everybody will agree that the BBC is at the heart of British culture. I think the BBC is one of the nation’s most treasured institutions, and there is broad agreement that, as a public service broadcaster funded by the licence fee, it is vital that accurate and impartial news is at the centre of the BBC’s output. So far, so good.”

“Does the Minister accept that that is a rather circular argument? The BBC’s monopoly and the huge amount of resources it gets from public finances have allowed it to become the main news organisation in the United Kingdom. If the bias with which it presents the news becomes mainstream, of course it is going to be accepted as a trustworthy organisation, but only because it has been able to use its power to mould the views of the population. That is why the question of the licence fee and impartiality is important.”

It is especially remarkable that Matthew Hancock had nothing to say about the BBC’s anti-Israel agenda, since he was one of the MPs that was in Israel in February as part of a trade delegation. I understand that at that time several MPs went to a presentation by Palestinian Media Watch. Whether Mr. Hancock was there I can’t be sure, but he really should be aware of the BBC’s appalling bias against Israel. He does agree that impartiality is important, which makes it all the more peculiar that he hasn’t said a word.