I suppose the practice of having a limited number of anchors handling any number of issues inevitably leads to a ‘jack of all trades, master of none’ scenario.

It seems that, say, Mishal Husain routinely gets the Muslim-related interviews and so on, but mostly it’s down to any given presenter to approach each item as best they can. This can lead to some annoying interviews, when the questions you might want raised, just aren’t.

A good interviewer is supposed to ask the questions that we, the audience, would like to ask if we had the chance. They’re doing it on our behalf so the story goes. The problem is, of course, that you often get a generalised, one-size-fits-all product at the end of the day. Or at the beginning of the day, as is the case with the Today Programme. 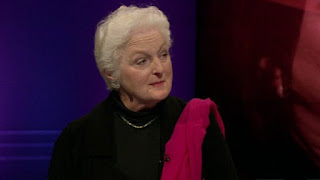 This morning I listened to Sarah Montague talking to Rabbi Julia Neuberger about a letter she’s co-signed with other religious leaders asking the government to take in more refugees, particularly children.
This is not especially about the letter itself, the minutiae of which I know not.  It’s about Sarah Montague’s line of questioning, which was pretty much confined to trying to get Julia Neuberger to commit to a ‘number’, which she obviously wasn’t prepared to do. She said so, in so many words, so asking her again and again was a bit of a waste of time.

I might not be your typical listener - on this matter at any rate - but if I were given the opportunity to chat with Rabbi Neuberger, I would take issue with her on other, perhaps more awkward aspects of this.

The most obvious problem was her ‘Muslims are the new Jews’ hypothesis. She made the simplistic comparison between the current refugee crisis and Jews fleeing Nazi persecution. 'They had been given sanctuary in the UK in the late 30s,' she reasoned, 'therefore the same privilege must be extended to child refugees from Syria and other war-torn countries now.'  This is not an ideal comparison for a number of reasons, but I understand that many people think it’s a vivid way of making their point, and I accept that. However, I'm still going to argue against it.

I would have been more impressed had Sarah Montague addressed assimilation, integration and general difficulties associated with absorbing large numbers of Muslims into our broadly secular society. None of those problems arose with Jewish refugees as far as I’m aware, for reasons of culture, ideology or quantity.

Julia Neuberger pleaded that some of the child refugees had relatives already here who would willingly take them in, but I don’t necessarily see that as an advantage in terms of assimilation and integration. Some potential host families might be more integrated than others, though I don’t quite see how Sarah Montague could have raised that without sounding ‘racist’, but as a skilled interviewer she could have found a way.

For me the biggest flaw in Julia Neuberger’s case was her use of the “AsaJew’ ploy. Or in this case, ’As a descendent of immigrants myself’. This ‘As-a’ business is not something to be played like a trump card. (not Trump, trump) Being a Jew, an immigrant, a member of the Magic Circle or being the actual shadow foreign secretary does not bestow upon one any special insights.

Yet other aspect of this approach - (the UK took pity on the Jews, therefore they must take pity on the Muslims) that is never addressed, is that - in case anyone hasn’t noticed - antisemitism is rife these days. There is a growing hostility to Jews and a general feeling that they control everything.
There’s already a feeling that somehow the Jews are lobbying hard for unlimited immigration, and are responsible for all the woes of the West.

Pleading for more immigration isn’t going to endear Rabbi Neuberger (or any of the other asaJews) to the antisemites, a large number of whom are Muslims.
Inviting a new influx of antisemitic Muslims “into your home” looks very much like an extreme case of turkeys voting for Christmas, which amounts to an absurd absence of logic. This conundrum is hardly ever aired in public because it’s racist to point out the racism in Islam, so it mustn’t be mentioned.

Just think. The religious leaders might feel smug and good about themselves for writing this letter, while making the rest of us seem hard hearted and callous, but the people who hate all immigrants won’t like it. The antisemites won’t like it. The Muslims won’t even like it.

To her credit, Sarah Montague did bring up the “political ramifications” of Germany’s generous immigration policy, but did not press the issue when the rabbi said “Just because of Germany’s difficulties, it doesn’t mean the UK could not take more.” “Doesn’t it?” might have been one answer.

I wish Sarah Montague had asked questions appertaining to any or all of the above, rather than the repetitive, superficial “How many?” approach she took, which is merely a version of the misguided ‘killer blow’ manoeuvre. It’s the same old “Yes or no?”…. “Did you or did you not?” strategy, favoured by Jeremy Paxman, and, when a Jew gets her dander up, Mishal Husain.
Posted by sue at 16:16