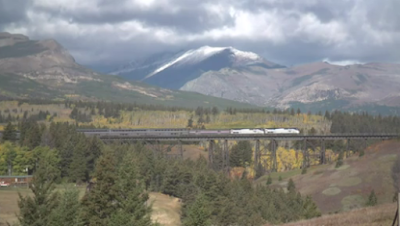 The BBC Election Train rolled across various BBC platforms last week. It travelled the northern United States and pulled in at various stations on Radio 4, BBC TV and the BBC website. It was manned by BBC reporters/producers Aleem Maqbool, Frank Strasser and Ashley Semler.

I've listened to (or watched) versions of all five of the week's reports and I really don't think they could better encapsulate the BBC's world view.

Indeed, BBC reporters and presenters have piled onto Twitter to sing the series' praises (especially Aleem's interview with the pro-Trump white supremacist, over which they've been cock-a-hoop).

I will try to summarise the reports as briefly as possible:

Day One focused on how unfairly US Muslims feel they are regarded in the light of various terrorist attacks.

Day Two focused on abortion and how badly US anti-abortion campaigners behave.

Day Four focused on white supremacist support for Trump, and how that's putting off many people.

Day Five focused on mixed left-wing feelings towards Hillary Clinton for not being left-wing enough.

Aleem's sympathies weren't disguised at all:

The US Muslims got a wholly sympathetic hearing on Day One, backed by Aleem's narrative. Their grievances were made to sound reasonable. Only aggrieved US Muslims were heard from.

Despite featuring both sides, the conservative anti-abortion campaigners were portrayed in a bad light on Day Two, thanks to the biased structure of the report and the accompanying narrative.

The pro-Trump white supremacist (Richard Spencer) was 'roasted' by Aleem on Day Four. Trump has moved such people from the margins, said Aleem. All four of the other (local) voices denounced Trump's bigotry and racism. No non-white-supremacist Trump supporters were featured.

And Aleem gave the assorted leftist activists a sympathetic hearing on Day Five. His tone was distinctly 'understanding' and frequently adopted their language as they agonise about whether to vote for Hillary or not.

Despite what the Corbynistas say (and despite the BBC doubtless showing bias against their man), the BBC is emphatically not a right-wing broadcaster.
Posted by Craig at 15:25