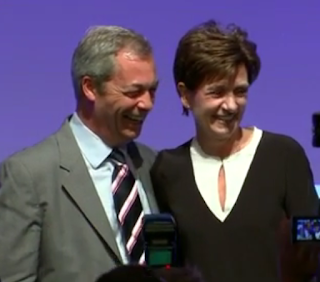 As the UK Independence Party prepares to announce a new leader, with Diane James the front runner to take over from Nigel Farage - what difference could she make to a Party that's failed to attract female voters.

But is it really true that UKIP has "failed to attract female voters"?

Well, according to Ipsos MORI's analysis of the 2015 general election, the answer to that is a pretty emphatic 'no'.

UKIP (which won 13% of the 2015 general election vote share overall) attracted 12% of female voters - a couple of percentage points less than male voters but still a sizeable slice of the female vote overall, amounting to the combined vote share of the Greens (4% of women) and the Liberal Democrats (8% of women).

So quite where Woman's Hour got the idea that UKIP has "failed to attract female voters", God alone knows!

(And even if he does know He's probably far too scared of Jenni Murray and Jane Garvey to say).

Incidentally, that Ipsos MORI analysis does show a gap in support of 6% between older men (19%) and older women (13%) but also, very intriguingly, shows the difference going the other way among young voters with more young women voting UKIP (10%) than young men (7%). Would Woman's Hour discuss that? (Spoilers! No).

Jenni Murray (naturally) discussed UKIP with a left-leaning Guardian writer, Gaby Hinsliff. (This is Woman's Hour after all). Their discussion ran much as you'd expect but, to give you a flavour of it (if you aren't overly eager to hear it for yourself), here's Dame Jenni:

Now, as you may have heard in the news, UKIP begins its conference today in Bournemouth. And this afternoon the name of the new leader of the party will be announced. There are rumours that a certain contingent has been begging Nigel Farage to return. He's apparently said that will only happen if the government fails to deliver the withdrawal from Europe. So how likely is the party, not known for its feminist credentials to have by the end of today its first female leader? ....

Gaby, how likely is it that UKIP will get its first female leader today?

How much of a problem has the blokish image been for UKIP, like calling women who don't clean behind the fridge 'sluts'?

Now, three of the five candidates, as I said, are women. What sort of policies have they campaigned on for their leadership bid?

If a woman is chosen what impact will be have on UKIP's heartland, the predominantly male support? I'll hesitate to call them 'grumpy old men', which is what you said.

So what are the main threats to UKIP's future then? Is it simply that the Conservative Party are doing what they've asked for?