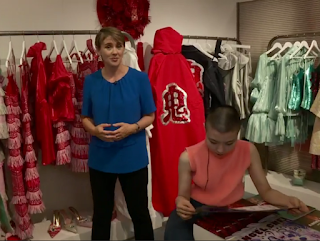 The BBC One News at One bulletin today featured another negative report about Brexit.

The item was introduced as follows:

The fashion industry is big business for the UK, bringing in around £28 billion into the economy. But as London Fashion Week prepares to welcome visitors from 58 countries some industry experts have expressed concern about the impact Brexit could have on the industry's global status. Well, Emma Simpson has been in Soho to see Fashion Week get underway....

According to Emma Simpson, "the real talking point here is what will Brexit mean for British fashion". [Really, Emma?]

After one pro-Remain designer, Anya Hindmarch, admitted that the cheap pound, post-referendum, has boosted trade at the moment, it was then straight onto the negatives (when the vast bulk of Emma Simpson's report lay) - "But this industry is worried about the potential downsides" - and then specifically onto the main concern: the possible stopping of free movement.

Caroline Rush of the British Fashion Council argued that it's vital that talent from abroad can continue to come here, and then Emma introduced us to Roksanda, a very successful designer and led her along a particular path:

Emma: She's Serbian but her fast-growing business is British. She came here to study and never looked back, now dressing some of the world's most famous women.
Roksanda: I came to London from Serbia because I was so inspired with all the incredible imagination that is coming from London. And I think that London is still a little melting pot of ideas. Huge innovations, pushing the boundaries are what fashion needs.
Emma: Would you be where you are today if you hadn't been able to come to London?
Roksanda: Definitely not. And this is a very straightforward answer.

Emma Simpson end her report by saying that the fashion is is "determi best of Brexit" before adding, in a more downbeat tone of voice,  "whatever that may bring". 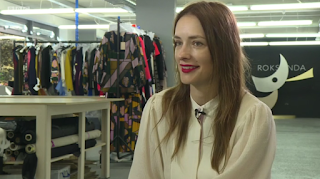 Incidentally, as  others have spotted, Serbia isn't a member of the EU. Roksanda didn't come here, settle down and build her successful business in this country because of the UK's membership of the EU and EU free movement rules, despite what Emma's viewers doubtless took her to be suggesting here.

In fact, it looks here as if the BBC's Emma Simpson herself simply assumed that Serbia is in the EU and that Roksanda must have come to the UK because of the UK and Serbia's 'joint membership of the EU' - which would be a pretty basic error on a BBC reporter's part.
Posted by Craig at 21:14