On Sarah Champion, TherAYza May and Geology 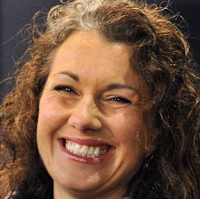 She was on to discuss the Labour Party's present position.

The segment itself was pretty balanced. There were three guests (all Labour of course): (1) anti-Corbyn Tessa Jowell, (2) pro-Corbyn activist Stephen Low and (3) anti-then-pro-then-anti-again-then-pro-Corbyn-again Sarah Champion.

It was all rather amicable, except perhaps for "kinder, gentler" Mr Low calling Dame Tessa an "establishment figure" (though he did preface that by saying "forgive me for using the term", which, of course, makes it all right!).

Unexpectedly, however, the discussion began with Jonny Dymond (standing in for Paddy) asking Miss Champion about the revelation (this week) that she'd been arrested and cautioned by the police in 2007 after a violent row with her then-husband.

That has some political resonance because Jeremy Corbyn made her his Shadow Home Office Minister for Preventing Abuse and Domestic Violence last year (thus entering 'You couldn't make it up' territory).

Though widely reported in the press (from the Daily Mirror to the Times), I'd previously heard or seen nothing about this story on the BBC (and I've checked the BBC News website very carefully to make sure of that corner of the BBC's vast output), so well done to BH for at least raising the subject.


Incidentally, Jonny Dymond himself had earlier apologised. He said sorry for mispronouncing Mrs May's name 'TherAYza' rather than 'TeREEza'.

In fairness to him, however, he's far from being the only BBC presenter to have mispronounced her name. (I keep hearing them do it).

He is the only one to have apologised for it though (so far).

And while I'm on about BH, the paper review told us that Geology is the course that results in the highest earnings for graduates. The lowest-earning subject is Psychology (which it's been for some time, if I remember rightly - replacing the old lowest-earner Sociology).

The cited Times headline was 'Geologists hit gold with best graduate pay'. I'd have preferred 'Geology rocks!' (I won't give up my day job).
Posted by Craig at 18:15