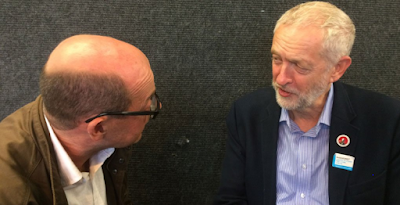 The 8.10 spot on this morning's Today was given over to a Nick Robinson report from a pro-Jeremy Corbyn rally at the weekend.

Nick, who's on record as having agreed with the Corbynistas that the BBC has shown bias against their leader, gave the chanting 'Jez We Can' crowd at the rally a very generous hearing. He then had an informal interview with Jez himself, even allowing Mr Corbyn to be sarcastic (in his rather leaden way) at the BBC's expense.

It was so Corbynista-friendly that even the Corbynistas on Twitter approved (for once), albeit rather sourly.

Not so the Blairites...: 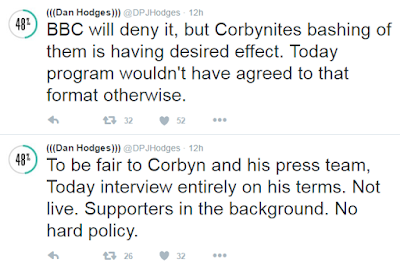 Does Dan have a point though? Should the BBC have indulged the usually Today-averse Labour leader in this way? Was this the BBC trying to appease the Corbynistas here?

The report with the Corbyn supporters was particularly striking as one described herself as the daughter of Conservative-voting parents who'd be shocked to know where she was. (That didn't surprise me as she sounded very young).

Another (equally upmarket-sounding) said that he'd just become interested in politics again having lost interest after the fall of Mrs Thatcher. He'd been a Thatcherite when he was last politically-engaged. Now he thinks Jeremy offers something different to the three mainstream parties who agree on so much. (That did surprise me).

Is it really true that people who sound like 'natural Tories' are supporting Jeremy Corbyn because he's different'? Or did Nick find a couple of atypical Corbyn supporter there?
Posted by Craig at 20:36