I suppose I ought to write something (as others are doing) about Chris Packham being cleared by the BBC Trust for calling those involved in hunting "the nasty brigade" and demanding a ban on driven grouse-shooting in the BBC Wildlife magazine.

The (two) complainants argued that Chris had broken BBC impartiality guidelines (the BBC Wildlife magazine being bound by those guidelines) and had a conflict of interest (being a campaigner against driven grouse-shooting).

The BBC Trust cleared him because he was considered not to be working in "news or policy output", and because the article was labelled as "opinion" and a right to reply was offered - duly given in the magazine's next edition - and because Chris is a freelance presenter and not a BBC employee, meaning he's "open to associate himself with wildlife charities without being in breach of the guidelines".

That said, the BBC Trust suggested that he and his BBC bosses "assess regularly and formally" his campaigning to make sure it doesn't undermine the "impartiality and independence" of his BBC broadcasting, and the BBC Trust told him not to use the phrase "the nasty brigade" in the future.

Hmm. So the BBC Trust did see some problems with what Chris Packham wrote for BBC Wildlife.

The status of freelance BBC presenters is a definite 'grey area' when it comes to BBC impartiality. It remains troubling.

In Chris's defence, however - and, admitting in advance my own possible bias as a very loyal Springwatch/Autumnwatch/Unsprung viewer - I've closely observed how careful he is, when presenting those high-profile programmes, to restrain himself when in comes to controversial topics.

He's even cited BBC impartiality guidelines at times as to why some Unsprung discussions have remained within certain confines and then stuck to those confines.

Yes, he may well have been hinting there at his own dissatisfaction with those guidelines, but stick to them he still did.

To end, here's a drawing of a hen harrier (Chris Packham's main concern when it comes to driven grouse-shooting): 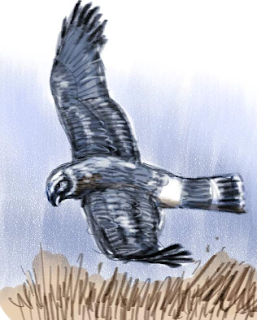