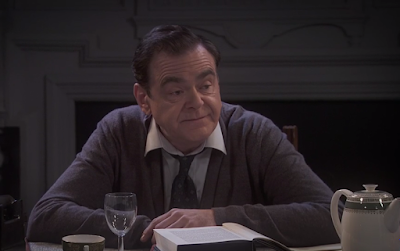 The BBC's recent splurge of old sitcom revivals has at least thrown up one gem (in a nice rather than vomitty way): a transfer from Radio 4 to BBC Four of one of those 'missing Hancocks', starring Kevin McNally as 'the lad himself'.

The 'lost' script was Galton and Simpson at their best and genuinely funny. I laughed many times, even though I'd already heard the Radio 4 version last year (and the jokes were the same).

There's still about three weeks left to watch it, if you so fancy.

Kevin McNally's impersonation of Tony Hancock is so good it almost makes 'the lad himself' look like the tribute act. Katy Wix also impersonated Hattie Jacques and Dead Ringer Jon Culshaw impersonated Sid James, both pretty well, but Robin Sebastian (who I'd never heard of before) exceeded both and was so riveting in his no-holds-barred impersonation of Kenneth Williams that my nostrils positively flared in appreciation. The actor Kevin Eldon also did a neat turn too (as you'd expect from the actor Kevin Eldon) as someone called John Vere (another actor).

Here's a taster of the script:

Tony Hancock: What sort of man do you think he is? {the  mysterious new neighbour}

John Vere {having snooped on him and taken notes on what the removal men carried into his house. Reading from his notes}: Well, I'd say lower middle class, but quite well-educated, judging by his bookcase. Reads a lot. Mostly crime stuff. Authentic accounts of famous murderers. I saw 'The Mass Murderer of Leipzig', 'The Bluebeard of Bordeaux', 'The Basingstoke Wife Murderers', 'Case Histories and Methods of 100 Homicidal Maniacs'. He's got a big trunk full of assorted women's clothing. Large collection of guns, daggers and axes. Lot of gardening equipment. Spades, pickaxes, forks. Probably does a lot of digging. A large zinc bath. And an incinerator.