Reflections on this Sunday

I forgot the Andrew Marr show was starting half an hour early today so I went out for a walk.  I don’t know what I missed, but it couldn’t have been better than fresh air, big sky and sparkling sea on a beautiful, breezy, autumn day.

Millions of surfers were out already. I spotted one wearing a huge oversized towelling maxi-poncho with a hood, roomy enough to get changed in/under. Never mind the burkini, this is what I call modesty. No more towel, hitched precariously below the belly. Must recommend it to David Cameron. 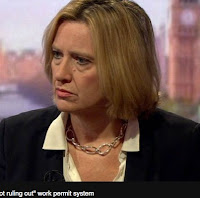 Anyway I did catch Andrew talking to Amber Rudd, who looked as though she’d been dragged through a hedge backwards - bit like me -  and I did notice that she was wearing a necklace in the form of a giant silver chain just like Theresa May’s. (Is that symbolic - of being chained to one’s office?)

The interview was virtually pointless because neither Theresa nor Amber are presently willing to divulge anything whatsoever. They say it’s premature “You don’t expect a running commentary on our Brexit negotiations, do you Andrew?”  Theresa May said something similar last week. No-one is sure whether the secrecy is a cover for downright uncertainty and indecision.  “Now what are we going to do?” Just lie back, repeat “we’re doing what’s best for the UK” and think of England.

All the best stuff occurred outside the usual Sunday morning political fare. Emily Thornberry gave a car-crash interview on Sky, (the BBC reported it rather generously here) in which Dermot Murnaghan exposed the mind-boggling extent of shadow foreign secretary’s ignorance. Vast swathes of it. He kept saying, with incredulity, “But you’re the shadow foreign secretary.”

The funny thing is, it was Thornberry herself who brought up the ‘pub quiz’ analogy, which drew attention to the fact that she’s probably less well informed than your average pub philosopher.

She must have learned that when you’re in a corner, the best defence is attack. Rats are well known for doing that. She alighted on sexism, but that strategy didn’t fool anyone, except perhaps the person who wrote the aforementioned BBC report. The Sun has some fun with it here.

I thought this story was interesting. Michael Foster was the Labour candidate for my very own neck of the woods at the last GE. Labour doesn’t stand much of a chance in this constituency, but I must say I felt a pang of admiration for Foster last year when he shouted out “Say the word Israel” at Corbyn’s  Israel-free speech at the Labour friends of Israel reception. (He wouldn’t say it.)

The Mail has a much more colourful version of this story than the BBC’s subdued account of it.

It seems that after he lost his court case (he fought against Corbyn standing for re-election without having to establish the requisite number of nominations) Foster published an article in the Mail on Sunday savagely attacking Corbyn’s leadership. Now the Labour Party has barred Mr. Foster from even voting in the leadership election, despite the fact that he had donated huge sums of dosh to the party before Corbyn’s reign. He’s also been banned from the Labour Party conference. I don’t suppose they want him shouting out any more awkward requests.

This is a big row that has been going on for some time, and reignited on 14th August, 2016 when he wrote the infamous ‘stormtroopers’ article for the Mail on Sunday. I haven’t read it, but it obviously caused quite a stir, especially as the MoS had taken it upon themselves to put the word “Nazi’ in the headline.

The Huffington Post hit back with a piece by Corbynista Richard Burgon MP., which included several Tweets by well-known hat-wearer George Galloway and assorted members of the hard-left.

Another closely related scandal has flared up surrounding Corbyn, which according to the Telegraph has “reignited” all those allegations of antisemitism.

The Guardian and the Telegraph have printed almost identical reports, but you get the sense (or is it just me, looking for trouble) that the Guardian is slightly more hostile to Israel than the Telegraph.   I would say that, wouldn’t I.

The story, in case I completely forget to explain it, is that  Corbyn first ignored, and has now turned down, the invitation from Isaac Herzog, leader of the Israeli Labour party, to visit Yad Vashem in Jerusalem “to witness that the last time the Jews were forcibly transported it was not to Israel but to their deaths”. (This alludes to Ken Livingstone’s theories about  Hitler and Zionism)

Corbyn is sending a flunky in his place. His diary is full, he says. Probably full of urgent Stop the War Coalition fundraisers and the like.

Here’s another version of the story, with added gossip about Seumas Milne, which he denies.

“In the latest of a series of allegations of anti-Semitism plaguing Britain's Labour Party, media reports on Sunday said that one of party leader Jeremy Corbyn's closest aides had tried unsuccessfully to get Hebrew expunged from a Jewish holiday greeting.

The New York Times and London's Jewish Chronicle say the adviser, Seumas Milne, wanted to remove the words "Chag Kasher Ve-Sameach," which means "A Happy and Kosher Holiday," from Corbyn's Passover greeting to the Jewish community.Dave Rich writes in The Times that Milne thought the Hebrew phrase "implied support for Zionism." 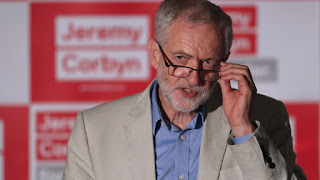 I’m not saying the BBC has been more biased than all the other news organs over these matters. It might have omitted some parts of these stories, and the parts it did report were handled in a subdued manner. It’s treading carefully. Heaven forbid it accidentally makes a value judgment. I’m aware that those stultifying ‘complaints from both sides’ are an ever-present threat, but less isn’t always more.
Posted by sue at 20:27