Nowadays, whenever I listen to Poetry Please on Radio 4 I can't help thinking of the (recently-much-maligned) comedian Jake Yapp's hilarious Radio Four in Four Minutes.

Jake impersonated poet-presenter Roger McGough's idiosyncratic delivery in such a funny way that I can't help hearing the real Roger McGough though the gently mocking hall-of-mirrors lens of Jake's parody:

A recent edition marked the 300th anniversary of Thomas Gray's Elegy Written in a Country Churchyard.

If you don't think you know it, think: "The curfew tolls the knell of parting day,/The lowing herd wind slowly o'er the lea,/The plowman homeward plods his weary way,/And leaves the world to darkness and to me" and "The paths of glory lead but to the grave" and "Some mute inglorious Milton here may rest,/Some Cromwell guiltless of his country's blood" and "Far from the madding crowd's ignoble strife,/Their sober wishes never learn'd to stray;/Along the cool sequester'd vale of life/They kept the noiseless tenor of their way."

It's a very fine poem actually and Mark Meadows read it wonderfully, but what especially grabbed me on this edition of Poetry Please was a totally unfamiliar sonnet by local boy William Wordsworth:

A Gravestone upon the Floor in the Cloisters of Worcester Cathedral


“MISERRIMUS!” and neither name nor date,
Prayer, text, or symbol, graven upon the stone;
Naught but that word assigned to the unknown,
That solitary word,—to separate
From all, and cast a cloud around the fate
Of him who lies beneath. Most wretched one,
Who chose his epitaph?—Himself alone
Could thus have dared the grave to agitate,
And claim among the dead this awful crown;
Nor doubt that he marked also for his own
Close to these cloistral steps a burial-place,
That every foot might fall with heavier tread,
Trampling upon his vileness. Stranger, pass
Softly!—To save the contrite, Jesus bled.

Poetry Please identified the man with the 'Most wretched of men' gravestone - one Thomas Morris (1660-1748), a minor canon of Worcester Cathedral who, as Roger McGough put it:

...because he refused to swear allegiance to King William III [Pause], the unlawful heir to the English throne [Pause], was deprived of holy orders [Pause], which were never restored. [Long pause] He died [Pause] a poor [Pause] and unhappy man. 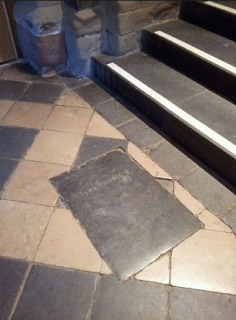 That prompted me to Google around and find out a bit more about the most wretched Canon Morris and led me to a fascinating piece from the Birmingham Post entitled Solving mystery of the epitaph that got Wordsworth musing.


The piece isn't free of basic errors, such as saying (wrongly) that 1683 was the year of the Glorious Revolution, but it outlines how the Romantics (like Wordsworth) poured "their world-weary and melancholic sentiments" onto Canon Morris, often maligning him in the process, and it provokes even more thoughts on the most-wretched man of all:

So the no longer Rev Thomas Morris found himself out on his ear, a “non-juror” in official parlance, a conscientious objector in more modern terms. He remained in Worcester, though, supported by funds from like-minded Jacobites, and continued to attend services at the cathedral. As to exactly how poor he was, it is not easy to say. Nor is it easy to prove that Morris was “kindly and gentle”, as some later writers claim.

What he undoubtedly was was bitter, and arguably self-pitying too, as the inscription upon his gravestone suggests.

Morris’s miserable existence, if such it was, came to its conclusion in 1748, more than half a century after his ejection from the Established Church. He was carried to his grave in the cloisters by six maidens, clothed in white, and bearing, it is said, a device of Morris’s own construction. My guess is that this would have been some Jacobite symbol, one last calculated snub to England’s constitutional settlement.

I do like a poem that leads you happily astray.
Posted by Craig at 09:29