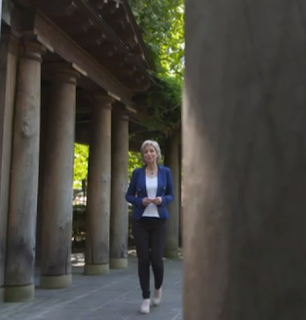 15 years ago today the world changed forever, the day we now call '9/11'. Terrorists flew planes in the World Trade Centre and the Pentagon. For all its shocking audacity 9/11 wasn't a one-off and its been followed by an increasing number of terrorist atrocities. But amid the horror there are stories of hope, and I'm in Central London to find them.

Her narration later continued in the same vein:

Terror attacks can effect anyone. That's what's so terrifying. While the grieving goes on for the nearly 3,000 people who lost their lives on 9/11, others have had to come to terms with more recent attacks, not least in France. Only a few weeks ago the lorry attack in Nice followed days later by the murder of Fr. Jacques Hamel in Rouen shook the nation and the world.

It's a painful truth that terrorist attacks occupy more headlines these days than ever. One man well qualified to take the long view is Terry Waite...

The terrible events of 9/11, commemorated in this garden in Grosvenor Square, unfolded exactly 15 years ago today....

...and traumatised many more". [Image above used to illustrated that].

The programmes script - as you may have noticed - was striking in the extent to which it went very far out of its way to find 'the right form of words' that would completely skirt around the question of who committed the terrorist attacks mentioned in the programme.

It was never explicitly said who was behind such attacks. The nearest the script ever came to apportioning blame was to name and shame 'terrorists' and 'lorries'.

And then, near the end, came the one and only hint...and it was the bit I just knew would eventually come...:


Few of us know what to say after a tragedy, but some have responded with peaceful action. Parishioners at St. John on Bethnal Green invited local Muslims to join their Sunday service....

"It's been a great opportunity to be clear about our faith, but at the same time to be welcoming and to stand together in solidarity with Muslims too."

And three Muslims agreed that peace is lovely and bonding is great.

Cue Cardinal Nichols being optimistic and praying for peace and love - a prayer joined by others - with a final hymn of hope following.

The level of conscious story-shaping here, to avoid in any way casting any Muslims in a bad light, even for a second, was very plain to see.

Doubtless, the intentions behind such blatant manipulation were well-intentioned, liberal ones, but the effect was disturbingly patronising.

It absolutely reeked of self-censorship and agenda-pushing.

They were some pleasant hymns though.
Posted by Craig at 17:07