Lies, damned lies and the BBC

This week's Feedback featured an interview with Paul Johnson of the Institute for Fiscal Studies, one of the four panellists on the BBC Trust's latest impartiality review - one looking at the corporation's use of statistics (and, largely, giving the BBC a clean bill of health).

When Mr Johnson and Roger Bolton turned to the question of the EU referendum, it wasn't hard to guess where the BBC might take Mr Johnson's call for the BBC to be "braver" in the future:

Roger Bolton: But you go further than that. You say 'braver'. It's not a question of just being informed, to explain things. It's being braver. Some people would say that would mean you're going to editorialise. 'Go on, tell us what you really think?', that sort of thing, And that's not  really the BBC's job. [Not that doesn't stop lots of BBC reporters from editorialising anyhow!]

Paul Johnson: Well, you can be brave by saying that something is highly likely to be true, as opposed to not. So if you look back at previous reviews that the BBC Trust have done - e.g. the reporting of climate change - there was a period during which what was reported was, you know, 'On the one hand some scientists think this. On the other hand some scientists think that' [Really? That's not how I remember the BBC behaving. They always seemed to be talking about the '97%' or the 'consensus' in the years before that impartiality review], and the braver thing to have done would have been to say, 'Well look. the vast majority of scientists think this thing, and there are these very tiny minority on the other hand who think the other and, therefore, we're going to say, you know, on the huge balance of probability, one thing is true and not the other'. And, actually, there are quite a lot of things were that is terribly important because simply telling people, 'Somebody says this. Somebody else says that', doesn't help inform.

Roger Bolton: Well, that's just what some people have said. There is...the idea of 'false balance'. But, I mean, it's alright talking about that in theory, and maybe it's OK talking about science, but when you're in the nitty-gritty of politics, such as the referendum campaign, and one side, for example, says...talks about the £350 million that we're going to get back [how typical of Roger Bolton to have chosen that particular stat rather than, say, the Treasury's '£4,300 worse off' claim!] then, you know, the BBC journalists are thinking, 'What do I do here?' Do you think they treated that issue properly?

Paul Johnson: Not in all circumstances, though - let's be blunt - the £350 million number was simply untrue, just straightforwardly untrue.

Roger Bolton: And you would like the BBC journalists to say, 'It's untrue'?

Paul Johnson: And there are...

Roger Bolton (interrupting): Would you like the BBC journalists to say, 'It's untrue'?

Paul Johnson: There are some places where they come very close to doing that, particularly in the 'fact check' part of the website [indeed they do - far too much so for some people], where it comes very close to doing that. More often it refers to the number as being 'disputed' or 'uncertain' [or 'controversial'] or what have you, and I think it should have been clear that this is a number that is not correct.

Roger Bolton: My thanks to Paul Johnson from the Institute of [sic] Fiscal Studies, whose statistics are always reliable. 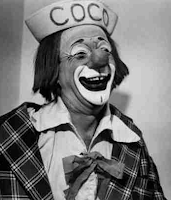 All of which reminds me of something from an edition of The Andrew Marr Show a couple of weeks ago where former BBC DG Mark Thompson and Coco the Clown made their return after an earlier joint appearance on Eadio 4's The Media Show.

Again, it wasn't hard to figure out which side of the Brexit debate Coco was intended to represent (especially given the previous discussion about experts and people being fed up with them, a la Michael Gove):

Andrew Marr: And, of course, referendums change things completely, because here on the newspaper review, and all the rest, we had to balance Brexit versus non-Brexit in every case.

Mark Thompson: So referendums present, I think, very difficult, possibly even, under the current rules, insuperable problems for broadcasters. You have imaginary parties. They’re temporary, they’re going to cease...

Andrew Marr: In and Out, yeah.

Mark Thompson: In and Out. They’re going to cease to exist the day that the vote happens, and yet you’ve got to treat them as if they are exactly equally balanced in the...in the polls. And in a sense, if...if one side, you know, produces an eminent, you know, economist, the other side produces, you know, Coco the Clown, they’re sort of treated as if they’re somehow equal. So I think there may be a case for looking at the rules for how referenda are...are covered in...in broadcasting.

In other words, Coco the Clown on one side shouldn't be accorded the same respect as the eminent economist on the other - a repeated call which continues to echo the gripes of aggrieved Remain supporters like Timothy Garton Ash, Roy Greenslade, and Feedback listeners who wanted the BBC to rubbish every 'clownish' Leave claim and to treat one side differently from the other if the BBC feels that side was right and the other wrong on any particular point....

....rather as Evan Davis did week in and week out during Newsnight referendum coverage anyhow!! (and it was always the Leave side which got the sharp end of the stick from Evan)...

...and just as Paul Johnson was calling for on Feedback.

If such people ever get their second referendum you can bet your bottom euro that they will lobby like maniacs to get the BBC's rules of engagement changed, and this BBC Trust impartiality review will doubtless help them down that road.

Just imagine a BBC that's even more off the leash 'next time around'!
Posted by Craig at 15:26