Further to the Trust's rather ambiguous/mealy-mouthed 'clearing' of the Springwatch presenter (of whom I'm a great fan), the UK Press Gazette reports:

New editor of the [BBC Wildlife] magazine Sheena Harvey told the BBC Trust: “Coming to this magazine as the new editor and with a fresh eye, I will say that I feel some of the language used by Chris Packham in that column was somewhat flippant and the use of a phrase such as ‘nasty brigade’ would not have been let through had I been overseeing the content.

“My aim for the future is to provide a platform for informed opinion, within the regulatory guidelines and with cogent factual and legal content, and to offer a right to reply in the next available issue to all parties concerned in the debate.”

The BBC Trust complaints committee said: “The committee considered that the fact that BBC Wildlife Magazine’s new editor would not have allowed the term ‘nasty brigade’ to have been published, together with the fact that both complainants had been given a right to reply to it, meant that the issue had been resolved and no further action needed to be taken.”

Well, of course they "considered" it that way, especially as they'd said exactly that themselves.

None of which will stop Chris campaigning. Just four hours ago, for instance, he stated his support (on Twitter) for another campaign against shooters: 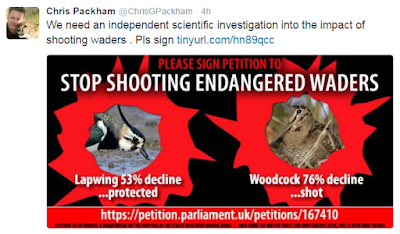 ...a campaign he himself started: 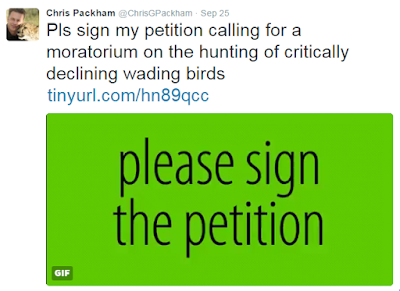 I'm getting the impression that Chris Packham is refusing to accept any criticism here, and being very public about that refusal.

Where will that lead him and the BBC? The BBC doesn't like insubordination in the ranks (even its freelance ranks).
Posted by Craig at 21:46