The Matter of the North

And still still catching up...

Well, I actually enjoyed Melvyn Bragg's 10-part series The Matter of the North. So there!

He may have overstated his pro-Northern case at time, especially in his bullish opening rant, but his walks around many of the landmark places of the North, often waxing lyrical, and his fine cast of academics and famous Northerners kept me engaged pretty much throughout - especially as Melvyn himself was just so enthusiastic about things. I even found inspiration for some days out: I would now dearly love to visit Whitby Abbey and might well pencil in a visit to Maryport's Senhouse Museum, with its rather striking Celtic artefacts (including this big fella): 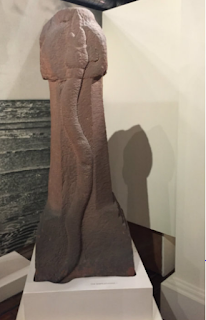 Melvyn got so personally involved with some of the Northern stories he told that he ended up breaking from the Labour Party position on the death penalty at one point, wishing that William the Conqueror had been boiled alive in oil for what he did to the North during his infamous (and truly disastrous) 'harrowing' of the region.

Some controversy has arisen (in certain quarters) over the political nature of some of the later episodes and, yes, Lord Bragg's Labour Party affiliation wasn't hard to discern from time to time - but not often and rarely intrusively...

In the 1980s the mining areas saw what might be called the 20th Century version of William the Conqueror's wasting of the North. The truly alternative culture that came with those communities was largely swept away in one generation as the pits were shut.

thus ignoring the (probably inconvenient) fact that massive numbers of mine closures and mass redundancies had occurred under previous Labour governments of the 1960s and 70s (significantly more in total than occurred under Mrs Thatcher).


Also, Melvyn did argue for a federal England in this episode (backed by Ed Cox of the left-leaning think tank IPPR North), with the North having the status of a country within a country (like Wales or Scotland). He also mentioned a cross-party group which is advocating that.

One critic of the programme claimed that this was an example of the BBC biased backing 'independence' for the North and supporting the break-up of the UK (the way, he claimed, that the BBC "backed" the SNP, the IRA and Cornish separatists). It wasn't really. Lord Bragg is pro-union (signing an open letter against Scottish independence for example), and that cross-party group (which ranges from Graham Brady, Gisela Stuart and Kate Hoey to Baroness Wheatcroft, Menzies Campbell and Peter Hain) is advocating federalism as a way of keeping the union together in the light of the Brexit vote, not splitting it apart.  (So maybe this is actually one for the cybernats to complain about then!)

And, finally, there was the Brexit question.

The same critic of the programme mentioned above wrote, "Bragg suggests that those who voted for Brexit were the stupid and ignorant folk, a sort of peasants’ revolt against their betters."

That's not at all fair (or true) though. Those words were actually spoken by one of Melvyn's experts - Professor Robert Colls of De Montfort University - and Professor Colls was a Leave supporter himself during the EU referendum campaign (arguing the left-wing, anti-globalisation case for Brexit). He was, in fact, criticising the kind of people who make such insulting comments. (Such insults depress him.) Neither (the Remain-backing) Lord Bragg nor Prof. Colls were even remotely insulting about Leave voters here. The charge is baseless.

The one bit of actual bias on Melvyn's part there was his (narrative) suggestion that the North might well suffer economically from Brexit, but he merely said that and passed on. I don't think it's one to get particularly hot under the collar about.
Posted by Craig at 15:36

Labels: 'The Matter of the North', Melvyn Bragg