Last night's Republican 'lamb' was this chap, then duly splashed on the Newsnight homepage: 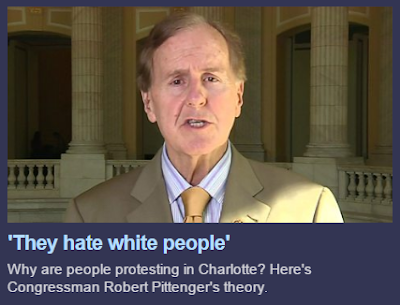 Anyone seeking to contextualise that quote - by saying that Congressman Pittenger (as he himself said to James O'Brien) was citing some of the public comments made by rioters in Charlotte that they do hate white people - must be a racist. Twitter says so, after all.

Funnily enough, JO'B then talked to a black US journalist, Goldie Taylor, and was very nice to her.

She talked repeatedly of an "uprising" in Charlotte and yet James didn't pick her up or challenger her on her use of language there. (Did it ever cross his mind to do so?)

Anyone wanting to see biased interviewing in action should simply watch these back-to-back interviews. 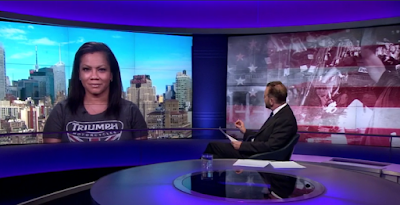 Even if you side with Goldie Taylor against Robert Pittenger, can you honestly say that James O'Brien was behaving like an 'impartial BBC interviewer' here?

What's that I hear you say? You "don't care!"? You think JO'B was right to be blatantly biased here?

Well, you may be perfectly happy with that (as many just like you on Twitter were) and think that the BBC should be openly taking sides - as it, indeed, does, again and again - on US political issues. But what if they also took against your side on either issues? On UK issues even? You'd complain then, wouldn't you?

Earlier on the same Newsnight, Emily Maitlis had presented a report comparing Trump and Boris, the Trump phenomenon and Brexit. The comparisons weren't exact, she said, but the similarities were striking.

Given the very low approval ratings Donald Trump has here in the UK (according to the polls I've read about), that might not be taken as a positive comparison here.
Posted by Craig at 17:15