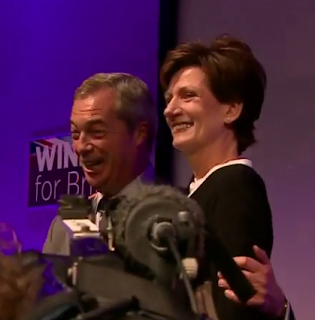 Carolyn Quinn had a real bee in her bonnet about the new UKIP leader on this evening's edition of PM. And, my goodness, didn't she make a right meal of it, waving her (metaphorical) hands at that poor bee again and again and again (and again)?:

12:23 Well, we'd like to have spoken to Diane James herself this afternoon but she refused our request for an interview - unlike her four rivals for the leadership who'd all agreed to talk to PM if they'd won.

16.22 Mr Crowther, it's lovely to be able to talk to you, and it would have been nice to have been able to hear from Diane James herself, to introduce her to the PM listeners. She refused to come on to our programme. Why do you think that is?

16.46 Because the other four candidates said that they would come on a do a full interview, just as you have, if they won the competition. Has she got something to be scared of by showing herself a lot on the media, because she didn't do hustings, did she, with the other candidates? She didn't really invite the media to too many of her events.

17.30 Stephen Crowther talking to PM...Unlike Diane James, who refused to.

And that last quote ended with a loud tut from Ms Quinn of the BBC.

Memories of Carolyn Quinn's huff came back to me just now, having watched UKIP's mild-mannered Mark Reckless getting the full James O'Brien treatment on Newsnight.

The thought crossed my mind: "Why bother, Mark, with Newsnight (especially if James O'Brien is presenting)? Just boycott it! No one, except me and Ian Katz's missus, watches it anyway."

JO'B did his usual thing. He even ended the interview by tacking on a snide comment about UKIP splits after Mr Reckless had finished speaking, simply in order to have the last word and be seen to get one over on Mr Reckless. He then moved straight on to the next topic, giving the UKIP man no 'right of reply'.

I find that very rude and unprofessional (though many left-wingers on Twitter can't get enough of JO'B's rudeness). It's behaviour frankly befitting a shock-jock and no BBC interviewee should have to put up with that kind of silly prima donna behaviour from a BBC interviewer.
Posted by Craig at 23:26