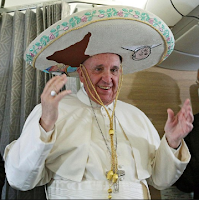 Talking about the Spectator, there's also a piece by Freddy Gray on "being a media Catholic", which ends with a revealing BBC-related anecdote:

On the whole, however, I didn’t face overt anti-Christian prejudice so much as bewilderment. The producers, runners and interviewers —  especially on the BBC and Channel 4 —  just couldn’t believe that, in their day and age, people still accepted what the Catholic church teaches, especially on sex. They tried to be sympathetic, but ended up being patronising. The best example came during a Have Your Say phone-in session on BBC World News. Again, the subject was gay adoption. After an hour or so of recording, the show finished and the producers wanted ‘out takes’ for the repeat edit. I was asked to adopt various poses as though I had been listening intently. The presenter reminded me that a gay man had called from Mexico to say that the Church had made his life hell. ‘Perhaps you could look surprised,’ she suggested, delicately. ‘I mean Mexico is a very Catholic country, so as a Catholic maybe you wouldn’t expect a gay man to be there.’ A gay man! In Mexico! I found the request so ridiculous that I pulled an over-the-top horrified face, as if I had just seen a poltergeist. Alas, it didn’t make the final cut.