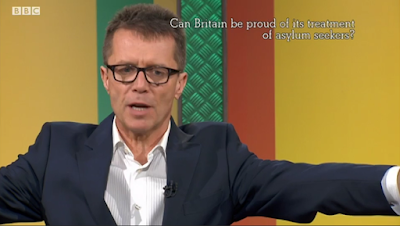 The 'big questions' on this morning's bad-for-your-blood-pressure edition of The Big Questions were framed as follows by Nicky Campbell:

All were put from a left-liberal standpoint.

...but his use of the phrase "which is unfortunate" in his third introduction was surely well beyond the bounds of strict BBC impartiality, wasn't it?

(Some people - namely me - might think it sounded rather to much like a party political broadcast for the previous Labour government (and Dan Jarvis)). 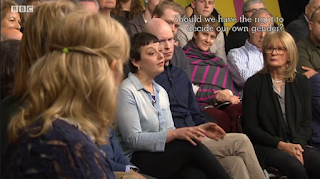 If the questions were typical of the BBC, then so was the studio audience.

At one point Kathy Gyngell told the TBQ audience, "It's very easy to virtue signal", and asked, "How many people here would take in a male economic migrant for an indefinite period?"

Nicky Campbell, seizing the moment, dramatically spun on his heels and asked the audience that very question.

Being a BBC studio audience, the majority of them raised their hands. A mere smattering of hands went up when Nicky asked them who wouldn't take such a person in.

Nicky said that showed what a compassionate audience it was.

When Kathy and Dan Hannan forced a third question on them, "And how many of you have taken in a migrant or a refugee?" only one hand went up (a pro-refugee charity worker).

Says it all really.

I know that Nicky Campbell has his fans, but I can't say that I find he makes for pleasant viewing at times.

Or that he's even-handed.

His treatment of Peter Saunders from the socially conservative Christian Medical Fellowship during the transgender discussion, for example,  was strikingly different to his treatment of the socially-liberal voices ranged against Mr Sanders (meaning, strikingly less respectful). Nicky's first interruption, "Please just answer the question", came literally after just second of his first answer - and, though he was then allowed to speak, Nicky's evident disdain for his views didn't seem to diminish.
Posted by Craig at 11:48