I do like a nice Andrew Graham-Dixon series on art and there's a new one on BBC Four at the moment called Art of France.

The first episode was very interesting (and a treat for the eyes) but its opening section in particular did seem to have a message or two to push: 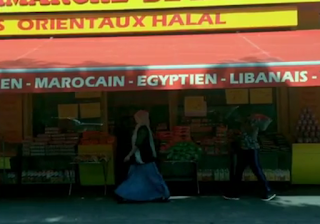 In the suburb of St Denis, on the northern outskirts of Paris, you can see the truly varied faces of this modern nation. But it's a reality many in France refused to accept. There are people who say that this place doesn't even deserve to be considered as part of France. But of course they're wrong. The truth is that France has never been just one thing. Proof of that lies at the heart of this ancient marketplace, in a building that's nothing less than the French equivalent of Westminster Abbey. The Basilica of St Denis. Final resting place of every French king and queen, bar three, stretching back over 1500 years. Don't be fooled by the tranquillity of this Gothic crypt into thinking that the history laid out here is one of serene continuity, or some ideal of pure Frenchness. Just like the market traders outside, these long dead rulers were a mixed bunch. Flemish, German, Italian, even English lie alongside the French. Like every great country, France has always been a mongrel nation...

Almost 1000 years ago, another revolution took place here. The first revolution in French art. The invention of Gothic architecture. The Gothic style transformed the churches and cathedrals of the Western world and it all began here. St Denis was the world's very first Gothic cathedral. 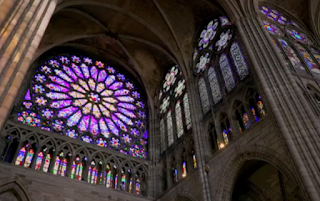 It was the brainchild of a man called Abbé Suger, who also wrote about it, describing the process by which the original church was transformed into this magnificent cathedral. Beginning in the year 1137, St Denis, already by then 500 years old, suddenly emerged from its Romanesque chrysalis. Spurred on by the visionary and ambitious Suger, St Denis's master masons borrowed from Islamic architecture, boldly synthesising Eastern ideas about structure, volume and form, with native innovations from Normandy and Burgundy. So, yes, Gothic was French, but spoken, you might say, with an Arab accent.

That closing section is a striking one. It's also a strikingly emphatic one.

I'm no art expert (unlike AG-D) but, having read around (and not just Wikipedia), the claimed influence of Islamic architecture on Gothic architecture appears to be only a "hypothesis" - and a "controversial" one at that.

Articles about the Basilica of St Denis echo the more general points that its architects developed features of the preceding Romanesque architecture.

So did Abbé Suger's master masons really "borrow from Islamic architecture" and does France's answer to Westminster Abbey really "speak with an Arab accent?"