The exception that proves the rule (again) 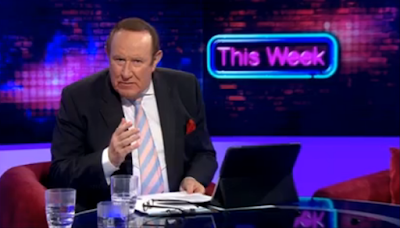 It could only be Andrew Neil (well, at least at the BBC):


Evenin' all. Welcome to This Week. Let me make clear right from the start that, though we value our relationship with the United States, and whether or not Donald Trump makes a state visit to this country is way above my pay grade, I would not wish to issue an invitation for President Trump to appear on this programme. I appreciate he's expressed no interest in doing so anyway. But that won't stop me doing a bit of grandstanding and virtue signalling before the rest of the media and the wider public. I've taken this position after much serious consideration as to how much free publicity it's likely to garner and without consulting the "Other Place". But frankly what Newsnight does is its own business and he's never going to settle for BBC2. Now I know that, over the years, we've welcomed Vlad the Impaler, Diane Abbott, Adolf Hitler, Attila the Hun, Ken Livingstone and Transylvania's very own Country Dracula into this studio. But let me say, as a self-important, solipsistic, egotistical, preening, pretentious, puffed up, postulating, pompous little pixie in love with the sound of my own voice, this programme's long-running opposition to free speech, sensible debate and proper analysis, coupled with its deep commitment to free Blue Nun for all means I would not feel comfortable sharing a sofa on the public airwaves with someone who says what he thinks and has never had even a sip of alcohol in his life. I just could not bring myself to do it. Unless, of course, he has that long-promised contract in his pocket for us all to defect to Trump TV. In which case we're ready to welcome him with a a two-hour special, a free bathrobe (since apparently he doesn't have) one and a ticker-tape parade.

That surely deserves a round of applause. Over to Mr. Speaker: 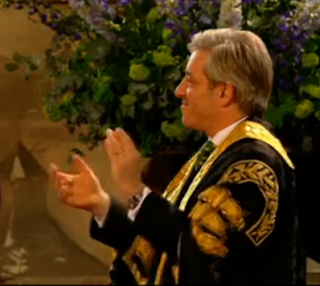 And as for the aforementioned Diane Abbott and that attempted kiss from David Davis after the Brexit vote, here's a typical Twitter exchange involving Mr. Neil (though Nick Robinson might want to have a quiet word with him later):

Dame A: Let's make a joke about sexual harassment in the workplace @afneil @bbcthisweek #unacceptable

Andrew Neil: Let's make a joke about you claiming it was sexual harassment. Fake news bollocks.