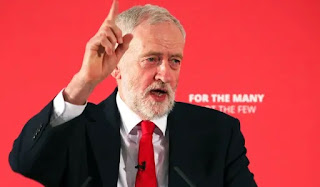 I have come to realise that my pro-Israel focus is of relatively minority interest, even for BBC bias nerds. It’s a bit niche, or it was until a few months ago. While this stuff is important to many of us (me) I could easily dominate this blog with material that would invite “people” to dismiss it as “Zio" - not that I need approval from them - but for that reason I’ve condensed this material, harvested from a particularly vibrant link-rich post on the Elder of Ziyon website into what Craig referred to the other day as a ‘pamphlet’.

It’s turned into a giant post, but I hope it isn’t dismissed as another tl;dr  - It’s more of a digest, a compendium. Dip in.

1) For me, a must-read. Many of EoZ’s pieces are American-authored and primarily aimed at an American audience. However, since the Labour Party’s antisemitism hit the fan, British politics has been catapulted into the spotlight.

As Rabbi Ephraim Mirvis correctly points out, Corbyn hasn’t merely “tolerated” anti-Semitic attitudes — as so many publications like to claim — but rather he has actively transformed Labour, once one of the most important political parties in the free world, into a safe haven for Jew-hatred. As Mirvis notes, under Corbyn, a self-proclaimed democratic socialist, Labour has “hounded parliamentarians, members and even staff out of the party for challenging anti-Jewish racism.”

Perhaps Corbyn’s rise simply reflects a new — or is it a renewed? — reality in Europe? A recent ADL poll claims that a quarter of Europeans hold anti-Semitic views. Around 45 percent of Poles and 42 percent of Ukrainians admit to pollsters that they believe that “people hate Jews because of the way Jews behave,” a view that over 30 percent of our old friends the Austrians and Germans share. And one of the fastest growing groups in Europe, Muslims, are importing an even deeper enmity towards Jews than is found in Poland, Ukraine, Germany, and elsewhere. Muslims in Western Europe are anti-Semitic at almost three times the rate of the general population. Thus far, Corbyn has appeased, rather than tried to extinguish, this hatred.

If Jeremy Corbyn’s Labour Party ends up winning next month, Britain will be led by an openly anti-Semitic government. Mirvis warns that such a result is an existential threat to Britain’s Jewry. What he can’t say, but implies, is that people such as Corbyn are exactly why Israel must exist.

2)That fake letter This David Collier piece has been on our sidebar for a short while. A piece that can genuinely be described as ‘investigative’ journalism.

"The British legal academic Julius said that “Antisemitism is stupid. It makes people stupid. It is not a coincidence that the least accomplished leader of the Labour Party is also its only antisemitic one…This is not a party that cares about the concerns of the Jewish community, save insofar as those concerns might have a damaging impact on its electoral fortunes.”

I tackled this issue in an earlier post, but it’s worth adding this:

"Julius concluded his letter stating: “To purge the party of antisemitism will be the work of a generation. The evidence that the political will exists to undertake this task is not compelling: members are not yet ashamed enough of their party’s antisemitism. The driving out of leading Jewish (and non-Jewish) politicians from the party, who cited its antisemitism, did not have a substantial impact on party morale, still less commit its officials and elected members to decisive action. We cannot leave the work to the party itself. Supporters have to lend a hand. Depriving the party of a vote is a start.”

5) This is a short article from the Campaign Against Antisemitism, but I thought this quote was worth passing on to our readers.

“There is no nuance, no clever turn of phrase or election soundbite that can undo what is done by Jeremy Corbyn. His record of supporting terrorists who want nothing short of the destruction of the world’s only Jewish State, his sympathy with those who murder and maim women, children, the elderly – any civilian – as long as they are Jewish – is a matter of public record that no amount of spin or whitewashing can erase. This is his legacy. He must live with it, and the solid and justified judgement and abhorrence that comes with it from the vast majority of Jews, not just in the UK but in Europe too.”

Watch as John McDonnell is confronted by British Jews leaving Labour's 'Arts For All' event.

When asked why Labour is ignoring the concerns of British Jews he awkwardly dismisses their fears and scuttles off to a waiting car.#LabourAntisemitism pic.twitter.com/FFnRuAnVek
— Israel Advocacy Movement (@israel_advocacy) November 28, 2019


John McDonnell leaving an 'arts' event with hard-left ‘veteran’ agitator Tariq Ali, supporter of Hamas and throwback to a previous generation of commies. One might have hoped these Peter Pans would have grown up by now. Of course, Peter Pan never grew up if I remember correctly. 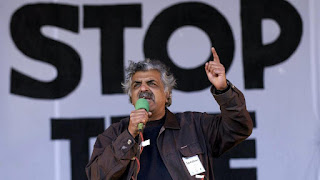 Describing Mr Corbyn as his “old friend and comrade”, Mr Ali – who founded the Stop The War movement – said that he wanted to begin his remarks by speaking about “antisemitism that we are told has swept the Labour Party, that we are told is a big problem for the left.”

He accepted there was prejudice against Muslim, Jew and gay people, but added: “If you were to ask me what is a bigger problem in Europe and north America – is it antisemitism, or is it Islamophobia?

“The answer is very clear, it is Islamophobia.”

7) For dessert, with a cherry on top, Canceling Roger Waters

Most people who find Roger Waters’ position on Israel and BDS objectionable take the “high road” and do not call for a boycott of the political activist/musician because of a fundamental objection to cultural boycotts. They believe, as do I, that cultural boycotts undermine the peace and understanding that comes from cultural exchange. Others, however, do not initiate a boycott of Waters because they believe it will be fruitless. For the latter, this example might make them think again.

The activists at the Westwood IPic theater wanted to send the message that antisemitism, like racism and sexism, is toxic to our world and you can no longer be publicly antisemitic without consequences.

Like everyone else, artists are entitled to express their opinions and advocate for their personal agendas. When they do, however, they invite a public response and fame and fortune should not be a shield. 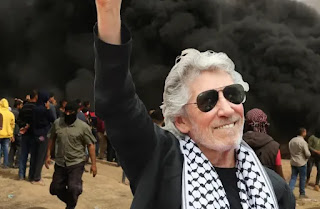