Reality Check
The claim: That Samira Ahmed really put the BBC's Reality Check chief reporter Chris Morris through his paces on 'Newswatch' this week.
The verdict: No, she didn't, It was a very soft interview. But our boss did great.
Well, maybe not... 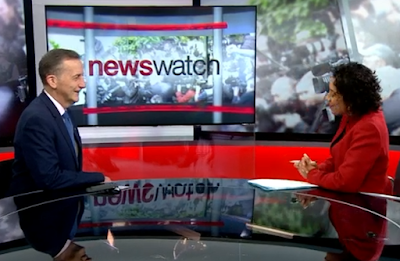 Here's a transcript of this week's Newswatch main interview:

Samira Ahmed: Disputes over facts and figures are part of any election campaign but this time around, the arguments seem more numerous and acrimonious than ever - hence the need for independent and neutral verification of the claims made, by organisations such as the charity Full Fact, Channel 4 News's FactCheck, and Reality Check on the BBC. The latter is usually fronted by Chris Morris, and recently, he's been very busy man. Here he is on Wednesday scrutinising Labour's claims that the NHS was at risk under a post-Brexit trade deal with the US:

Chris Morris: Of course, there's going to be pressure - that's what trade talks are all about. There will also be trade-offs. If the UK turns down some of these American requests, then we can expect the Americans to reject some key British demands for access to their market. But none of this is really proof that the NHS is somehow for sale, even if the US would like it to be on the table. But producing a definitive verdict on what the politicians are saying is not a straightforward affair.

The adjudications of Chris Morris have themselves faced judgement, with journalists from the Daily Mail and the Daily Telegraph over the past fortnight criticising his findings. And, of course, the whole business of fact-checking has come under the spotlight since the Conservative Party entered this area for last week's leaders' debate on ITV, as Jessica Parker reported:

Jessica Parker: Looking online, what to take at face value? Last night, a brief rebrand of a Conservative Party Twitter account to factcheckUK. The Conservatives say it was still clear who is running the account, but one senior Labour figure said Twitter should have taken it down.