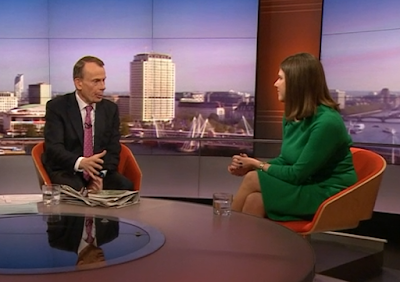 As mentioned by MB, here's Andrew Marr in The Spectator on the question of how to interview/how not to interview:

My Sunday job is to ask questions; but in this campaign there is a line of criticism of television interviewing which makes me pause. The rise of misnamed social media (mostly Twitter) makes it all too easy to clip and post ‘Gotcha!’ moments, when a politician appears to be gasping for air at a particularly pertinent question. Two or three such moments now win the wearisome accolade of ‘a car crash interview’. So (goes the criticism) interviewers are under increasing pressure to skew their shows that way — go for cheap shots, get them online, and hope they go viral. I admit it’s a temptation. But as compared with fact-primed, carefully planned and constructed interviews — of the kind Andrew Neil does — to go for ‘car crash’ moments would be folly and a disgrace. It’s a temptation (just wallow in the Twitter applause) which must be resisted. If I’ve fallen into it, I hereby apologise. And after all, the single most watched and damaging television interview of recent times, Emily Maitlis with Prince Andrew, contained no showmanship on Emily’s part whatsoever. There is nothing more effective than the right question at just the right moment, calmly put.

He's not getting a good response below the line, but then that's the "misnamed social media" for you again, eh Andrew?