No, it's nothing to do with impeachment.  It's just that I’ve been away from the office again, but I felt compelled to add comments to two of my previous posts even though they are deader than the parrot and extinct / gone but not forgotten. Here and here if you’re interested.

****
The media is relentless, isn’t it? I’m beginning to feel very sorry for Prince Andrew, and that’s saying something. I have to insert this caveat - I knew he was widely regarded as a complete asshole years ago when he was partly stationed at RNAS Culdrose and we heard multiple first-hand accounts to that effect.

But the way the media has vultured around him - (God, I hate it when people turn nouns into verbs - look what they’ve made me do!) has gone too, too far.

I’m not quite sure what his crime is other than being a complete asshole, and the schadenfreude in his downfall we all surely feel is undeniable.

But come on!  This piece, for example, by Spike's associate editor, Joanna Williams is fairly typical of the average response to Emily Maitlis’s  ‘thing’ and I think it’s a bit harsh, piling insult onto injury in a meaner than necessary spirit. Some of the comments below the line are interesting. 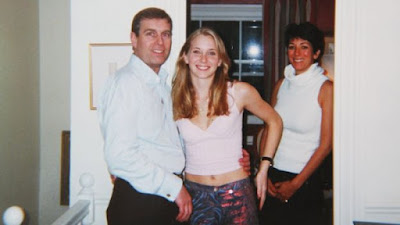 And I have to say, do take another look at That Photo. Doesn’t there seem to be something fishy about the angle of the left shoulder and the offending hand-on-the-bare-midriff?

I’m aware that it’s not the Beeb, but the ITV panto was terrible. Everyone thinks so. I’m afraid Julie Etchingham reached Fiona Bruce heights of intrusion and partiality, and the format was stifling and based on some sort of bear-pit principle - designed for the entertainment of the ill-informed masses who didn’t know what they voted for. Not only would we still not know what we voted for, after watching the whole hour including adverts, but it wasn’t even very entertaining. Unless you were timing the host’s interruptions or counting Boris’s repetitions or hoping Jeremy Corbyn would commit a Tourettes-like outburst of F***k the Jews.