They SHOULD be Sorry 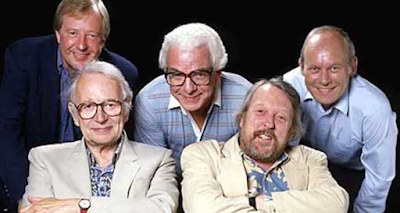 I'm Sorry, I Haven't A Clue has began its 72nd series.

It's a programme I've enjoyed since the days of Willie Rushton, and praised several times on this very blog as being, by and large, an oasis of old-fashioned, funny, BBC comedy - rather than the usual humour-deficient, over-politicised stuff the BBC now churns out.

(I've even transcribed some of Jack Dee's funnier introductions for your delectation (assuming he wrote them)).

Well, yes, ISIHAC has always dropped in the odd political joke, but this week's programme began with what can only be described as a string of bog-standard, predictable, left-wing, Radio 4-style political jokes.


I'll quote a tweet about it that is absolutely spot-on in describing what you missed, if you didn't hear it:

Mike Yardley: Just listening to BBC Radio 4's I'm Sorry I Haven't a Clue in the car. Switched it off. Ridiculous anti Brexit and anti Tory bias. No balance whatsoever. No jokes about Corbyn and McDonnell. Just spite about Farage & Boris & public schools and an effort to link Mosley to Tories.

Peter Charles: Yes I am afraid that the BBC's social engineering agenda has even infected ISIHAC. The changes in panel members is all part of that.

Mark Lees: I am a huge fan of the BBC but unfortunately this is correct, a lot BBC produced humour is the same. Remain-centric jokes, written by Remainers for Remainers at the expense of Leavers.

Should I transcribe the 'offending' jokes? Yes!:


Couldn't they have left us ISIHAC? Is that too much to ask?
Posted by Craig at 15:14