Not another one! (Bumped again!)

Bumped again! (Hope that’s ok with you Craig) because Ms Carroll’s behaviour has "attracted" the BBC, if not necessarily their scrutiny. 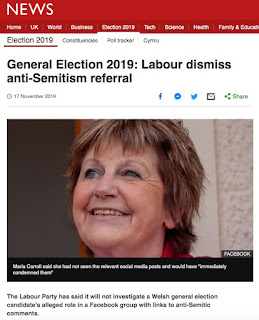 Being scrupulously impartial,  the BBC is keen to put her side of the story. Oh, wait, it seems to have forgotten to include the rest of it.

Oh well, not to worry. You can get it here:

*New*@UKLabour decided not to investigate Maria Carroll who ran a FB group whose purpose was to educate antisemites on how to remain a party member.

Maria says she didn't know these people were racists, this thread will prove she was fully aware.1/7 https://t.co/2TvRaoOvSl
— (((GnasherJew®גנאשר))) (@GnasherJew) November 18, 2019

Bumped, from first thing this morning, back to the top of the blog for those who like a  debate (see the thread below)...

The Mail on Sunday reports that Maria Carroll, Labour's Corbynite candidate in Carmarthen East, ran a secret Facebook group (the 'Labour Party Compliance: Suspensions, Expulsions, Rejections Co-Op’) advising members accused of antisemitism how to escape expulsion, including members who cast doubt on the Holocaust and promoted antisemitic tropes. There's lot of damning detail in the piece.

Lord John Mann, until the election MP for Bassetlaw, has tweeted, "Labour candidate ran secret group advising party 'Holocaust deniers'. This is on a deferent level. All those involved need suspending and none are fit to be candidates and need to have Labour endorsement removed today."

Will Ms Carroll's behaviour attract the BBC's scrutiny?
Posted by Craig at 18:41