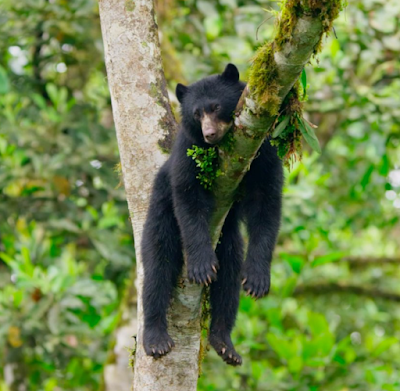 It's not news these days that the BBC Natural History Unit's mighty landmark series - usually with voiceovers by Sir David Attenborough - sometimes contain little editing tricks: a bit of helpful noise added from elsewhere, borrowed footage spliced in to make the story flow better, things that are meant to be happening in the wild being filmed in studios, etc.

It's not a particularly big thing and it doesn't necessarily do any harm, but it used to be surprising to hear about it.

And then there are the mistakes that accompany such practises...

The Sunday Times, prompted by two eagle-eared experts, has compelled the BBC to temporarily remove an episode of the latest BBC one blockbuster - Seven Worlds, One Planet - from the BBC iPlayer for further editing.

(1) The BBC, showing rare Andean bears (the ones who eat avacados) climbing trees, dubbed on some atmospheric bird noises. Unfortunately, they dubbed on the calls of "one of the continent's most recognisable birds" - red-legged seriemas - who don't live where the bears live but over a thousand miles away.

(2) The BBC, then showing those rare Andean bears brawling, dubbed on some extra bear roars to make it sound more dramatic. Unfortunately, they dubbed on the roaring of a much more common bear species.

(Also, the same episode confused a type of falcon called a caracara with a snail kite).

As per The Sunday Times:

The BBC conceded the mistakes, and said it was “occasionally . . . necessary to add supplementary audio” to cover “background noise or when filming a significant distance from the animal. We apologise for these errors and they will be corrected for future versions.”