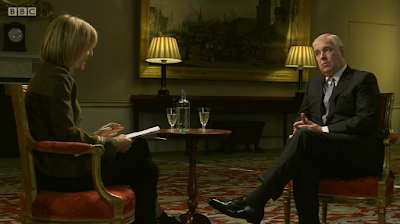 The BBC's Royal Correspondent Jonny Dymond is probably not going to get a Christmas card from Prince Andrew and his family after his Broadcasting House review of that Newsnight perfomance:

Jonny Dymond: Well, he got the message out. You know, he got the denial, the acknowledgement of having made a mistake vis a vis seeing Epstein, he sowed a bit of doubt about the photo. But, I thought, at nearly every turn that was undercut by the tone. It was a sort of mix of 'Je ne regrette rien' and 'Do you know who I am?'. The lack of regret over the friendship was breathtaking, I think, for most people. The question of whether he'd testify if he was asked to, he said, 'Well, I'd take legal advice and if they told me I would have to, if push came to shove, I would'. And then there was this horrible tone-deaf description of how this predator, Jeffrey Epstein, behaved:

I mean, who's he being polite to? The dead friend? I mean, 'manner unbecoming'! It was horrible. So much of it felt as if he simply could not apologise, and I think if he had gone in with a different tone the messages that he got out would have been that much more successful. But it was, as I say...it was undercut, I thought, by this tone of having nothing to apologise for.