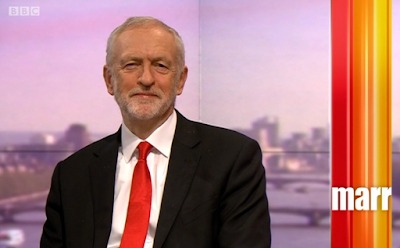 Part of that is that the Labour leader put in much the better performance. He was so relaxed by the end that it's a wonder he didn't start purring.

That said, Mr Raab, slipping and sliding away from giving straight answers, got the rougher end of the deal when it came to Andrew's questioning - and the intensity of the interruptions.

(Only Jeremy Corbyn got an apology for being interrupted today.)

Will Dominic Raab blame himself or his interviewer?

Andrew Marr asked questions about a Corbyn government's arms sales to Saudi Arabia and Israel. I noted that Mr Corbyn sounded a good deal clearer as to his courses of action when it came to Israel. He gave a very precise answer, so he's obviously thought a lot about it. Andrew didn't ask him about antisemitism.
Posted by Craig at 11:25