Evan, the party leaders, and the spot between 'The One Show' and 'Eastenders' 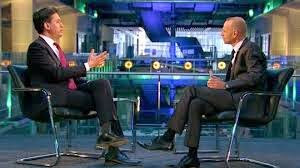 As there's a UK general election on, no one (surely) will begrudge us a fair smattering of election-related posts.

So, everyone having agreed with me on that point...

I've been watching all of Evan Davis's prime-time BBC One interviewers will the party leaders (7.30pm, between The One Show and Eastenders), and very interesting they've been.

Putting my ever-so-impartial Is the BBC biased? hat on, I've found all three interviews so far - with Nick Clegg, David Cameron and, tonight, Ed Miliband - quite fascinating.

Tonight's interview with Ed Miliband began with a bang - a veritable barrage of interruptions and Tory-defending questions - and then eased off considerably.

Ed's body language said it all (he says, sounding like a Big Brother psychologist!) His tongue stuck out at Evan in nervous rejection during the first few minutes, but (in the second half of the interview) his whole being quite visibly eased into a relaxed state and he even gave the appearance of starting to actually enjoy itself.

Would non-partisan BBC One viewers have felt the same way too? Did Evan consciously ease off as the interview went on, allowing Ed to blossom?

The interview last week with David Cameron went, somewhat, in the opposite direction, with Evan beginning gently, with few interruptions, but getting ever tougher and ever more 'interruptive' as the interview went on, eventually beating Ed's total number of interruptions. (Result!)

There were even, later on, some of those famous Evan Davis 'asides', which alert Today listeners will remember so well, where Evan contradicts his interviewee and then quickly changes the subject so that the interviewee can't reply - e.g.

"Pity, pity, you've been in government and have been unable to do that work hitherto. Look, Nick Clegg says..."

David Cameron was, however, near the top of his game and batted pretty much everything away with the appearance (at least) of a straight bat.

The interview with the aforementioned Nick Clegg was particularly intriguing. It had the most interruptions, and Evan and Nick got into an unexpectedly intense and strange spat over what the Lib Dem leader felt was Evan's misuse of his ability to speak Dutch.

The usual questions about Nick's "journey from hero to zero" and the Lib Dems' "broken promises" were 'balanced', however, by questions such as:

Do you regret the nationalist tenor of some British debate?

(Hmm, wonder who Evan had in mind there?)

And yet Nick - and, yes, I know you probably hate him - came across (despite everything) as essentially decent. And what more could he want from a prime-time BBC One interview?

Well, on Wednesday (it appears) Evan will be interviewing Nigel Farage.

Now that will be very interesting - and a real test for Evan Davis.