"Do you think it is responsible to have him on?" 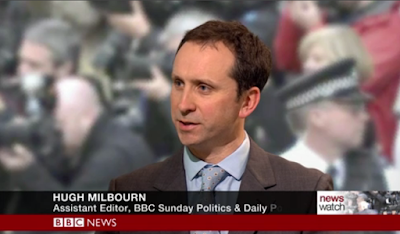 As regular ITBB readers will know, Newswatch presenter Samira Ahmed has been using Twitter, blogposts and newspaper articles for months now to air her concerns about the BBC's 'normalisation' or 'enabling' of people like Nigel Farage.

She thinks he's "pushing the boundaries of acceptable discourse" into unacceptable territory and, as a former leader of UKIP, should not be receiving so many invites from the BBC.

This week's Newswatch discussed that very topic, giving a platform to like-minded viewers.

It was a bit odd watching Samira doing her normal 'giving viewers a voice' routine (which she usually does very well) whilst knowing that she shares exactly the same views and that it must be music to her ears. (Did she have a say in choosing the topic?)

She certainly struck me as doing rather more than playing devil's advocate when she grilled the producer today.

Watch for yourselves here or peruse the transcript below at your leisure:

Samira Ahmed: That debate will certainly continue, but there was at least one BBC programme that featured a clear defence of President Trump's travel ban - BBC1's Sunday Politics. The guest was Nigel Farage, and Andrew Neil began by asking him if he agreed with the President's decision to bar Syrian refugees indefinitely from entering the United States.

Nigel Farage: You know, there are seven countries on that list. He's entitled to do this. He was voted in on this ticket. Andrew Neil: I didn't ask you if he was entitled. That's not my point of contention. I asked you if you agreed with it. Nigel Farage: Well, I do. Because I think that if you just look at what is happening in France and Germany, if you look at Mrs Merkel's policy on this, which was to allow anybody in, virtually from anywhere, look what it's led to.