The piece was quite amusing as Hugh Sykes is rarely criticised for being insufficiently pro Islam or immigration, so it was quite fun to hear him dancing around to try and prove his PC credentials.

(Not a Sheep, re this week's Feedback) 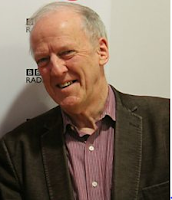 I heard a Hugh Sykes report on Radio 4's PM the other day on how US Muslims feel about Donald Trump's travel ban.

Much of it was as you'd expect from a BBC report on that subject, but I was genuinely surprised when Hugh said:

Well, it is true that almost all terrorism is carried out by people who describe themselves as Muslims.

Where is that really big, solid, loud public statement by Islamic leaders saying, 'We are just as much against the terrorists as you are, Mr Trump. We're on your side against these people who want to kill you because they want to kill us as well'?"

and adding that "very few" have made such statements, and that "it's a problem".

I also spotted that Hugh Sykes had been taken to task by a handful of people on Twitter for daring to tell the obvious truth, and had defended himself there:

Two of his Twitter critics were heard from on this week's Feedback, which chose to lead with their concerns:

My name's Irfan Mahmood and I'm from Bolton. I was listening to the report on the way home, which initially I found quite interesting and balanced. The part that upset me was when Hugh Sykes said to his interviewee that most terrorist attack are by people who call themselves Muslims. When you're talking about terrorist attacks across the world or about terrorist attacks in the US it should be made more clear of the facts of where he got this from. The other part I think that was unnecessary was the part where he said Muslim youth aren't condemning this. Muslim leaders have condemned this all around the world. The Islamic faith isn't like the Catholic church where you have a pope who can make announcements that applies to all Christians or all Muslims. So you can't say Muslim leaders aren't condemning this. They are.

Sian Matin. I'm from Stamford Hill in London. Hugh Sykes went on to insist that the Muslim community had failed to take action to condemn these terrorist attack. "It's a problem", he added to the interviewee. This statement is demonstrably inaccurate. Muslims have repeatedly and en masse condemned acts of terrorist violence.

Hugh defended himself again on Feedback, albeit conceding a little ground. Here's a transcript of him "dancing around to try and prove his PC credentials":

ROGER BOLTON: So Hugh Sykes, listeners picked up on some of the language you used in your PM piece and one listener on Twitter said "In an otherwise thoughtful piece" he says you "misspoke" and he's referring to this: You said, "But it is true that almost all terrorism is carried out by people who describe themselves as Muslims". Did you mis-speak?

HUGH SYKES: I could have phrased it better. In the context of the conversation, which was a day or two after the Muslim travel ban imposed by executive order by President Trump, it was clear to me and the interviewer - and to the editor who asked me to do the item - that we were talking about the international terrorist threat to the United States- not, for example, about all global terrorism, including terrorism in the United States. And, in fact, we hardly ever refer to the mass killers, mass murderers, of schoolchildren, university students and others in America as "terrorists" at all. And so I think what I said was fair. I should have qualified it in the question because it was possibly bound to offend some people. But I still say that in the context of the events and the executive order that we were talking about it was fair to say that the majority of the terrorism that President Trump regards America as being vulnerable to is carried out by people who describe themselves as Muslims. I was very careful to put it like that, not to say "carried out by Muslims" because that would be offensive and wrong.


ROGER BOLTON: I note you specific referred to President Trump there.  Some of our listeners...


HUGH SYKES (interrupting): Which I did do in the introduction. The studio introduction referred to President Trump and the travel ban and the executive order, so it was very clear that was the room in which we were speaking, so to speak.


ROGER BOLTON: There was a second quote which some listeners questioned. When you were talking to Ashraf Algamal, the president of the Arab-American Association in Phoenix, and you said to him. "Where is the really big, solid, loud public statement by Islamic leaders saying we are just as much against the terrorists as you are, Mr Trump?" some listeners say, "This is demonstrably inaccurate Muslims have repeatedly and en masse condemned the acts of terrorist violence." So did you mis-speak there?


HUGH SYKES: No, I don't think I did, and Ashraf Algamal responded to that question and that assertion by saying "Yes, it's a problem". He accepted the problem there's no kind of centralised authority, like there is, for example, in the Catholic church. There's no Muslim equivalent, no Islamic equivalent, of the Pope saying 'You must do this' and 'You must do that'. It's a very fractured and fragmented religion, and there are individuals ...of course there are individual imams, Muslim leaders and and like who are very robust in what they say about the appalling acts of mass violence that are carried out by people who describe themselves as Muslims, and I've heard lots of Muslim leaders saying that these people are not true Muslims because if you kill innocent people it's like killing the entire...the whole of humanity, which is, roughly speaking, a quote from the Koran. So, no, I think that was a fair point to put and Ashraf Algamal responded to it and said, "Yes, it's a problem".


ROGER BOLTON: Our thanks to Hugh Sykes. speaking to us from a no-frills motel in Arizona.