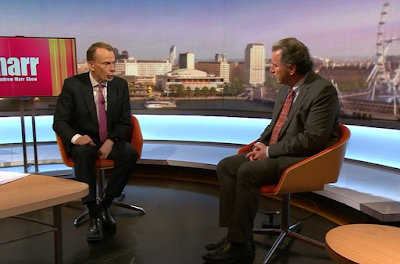 I got the strong feeling this morning, while watching The Andrew Marr Show, that Andrew was displaying open sympathy for Sir Oliver Letwin.

He kept on talking about the anger and aggression of the papers against the MP and himself dismissed as 'conspiracy theories' two allegations he later went on put to Sir Oliver for Sir Oliver to reject...

...which he duly did without receiving any further pressing on either of them from Andrew Marr:

A few quotes from this morning's programme should show what I mean:

"Sir Oliver Letwin, the man who ruined Boris Johnson's day yesterday and is ferociously attacked in this morning's papers."

"Reviewing the papers - some of them very, very angry this morning..."

"And now to the front pages. As I said, they can be quite angry."

"Let's turn, Peter, to the aggression in the papers. 'Oliver Twits' says The Sun there. There's been a lot of hostility to those MPs."

(Of Sir Oliver): "He's had an awful lot of ordure tipped over his head this morning by the press."

"And almost everybody I talked to had a conspiracy theory of some kind.  "What's really happening behind the scenes is this or that". There is a good example of it again in the papers. We were talking about Oliver Letwin and he's really being controlled by this lawyer David Pannick, or he's really being controlled from overseas, all of those theories about what the actual motivations are, whereas it's complicated enough just looking full frontal at what is going on.

"Sir Oliver Letwin was warmly greeted by a People's Vote campaigner after his victory over the Prime Minister. Unwisely perhaps, he grinned broadly and the picture is used in almost every newspaper as evidence that he's fundamentally hostile to Brexit itself. Is that true? And what are his plans for next week? He joins me now".

Question: "Let me ask you, as it were, about the motivation behind all of this because you were actually named by Number 10 as somebody they accused of "colluding with foreign powers", was the phrase used."

Question: "A specific lord, Lord Pannick - there are again allegations that, if I may put it this way, he was kind-of pulling your strings, that he was behind what you are dealing yesterday. And he has said himself that he was helping you to draft the legislation."