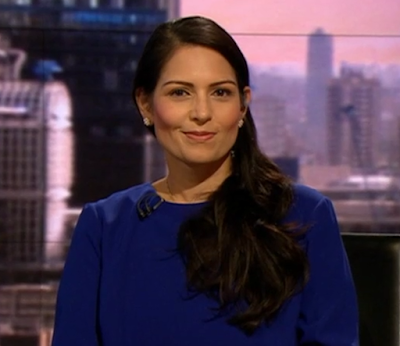 When not talking Priti Patel often wears an expression that some people think looks like a smirk. Those who don't like her often fling the word "smug" at her because of it. She was wearing it again while Andrew Marr was asking her a long question this morning. And he told her off for it mid-question:

Let's hear from those businesses directly then because a whole bunch of them...and I'll read them out: The Society for Motor Manufacturers and Traders, the people who make and sell cars, the Chemical Industries Association, the Food and Drink Federation, the Association of the British Pharmaceutical Industry, and the Aerospace Trade Industry body, a lot of people who are actually at the forefront of trying to make this country earn its place in the world sent a letter to the Government which I'll now read out part of to you, and they say that this proposal is "a serious risk to manufacturing competeness and will result in huge new costs and disruption to UK firms." I can't see why you're laughing. "It's got the potential to risk consumer and food safety and confidence, access to overseas markets for UK exporters and vital future investment in innovation in this country." That is a really serious challenge to this plan, is it not?

She wasn't laughing though.

Anyhow, it's won Andrew plenty of plaudits from the sort of people who usually spend their Sunday mornings slagging him off for being a Tory stooge: