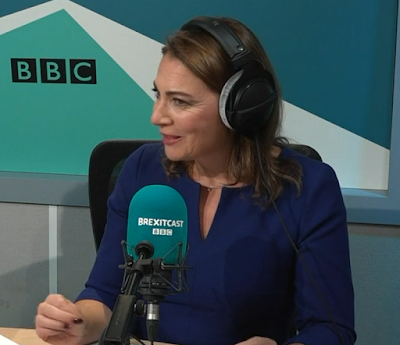 Fans of useless BBC punditry may especially relish this exchange from last week's Brexitcast on BBC One:

Chris Mason: Katya, you were saying, last week I think it was, I may not be quoting you entirely verbatim, but the essence of it was you thought that there was a vanishingly small likelihood of a deal. And for all of the noise and the talk of, you know, the clouds and now, maybe, a little ray of sunshine, it is still vanishingly unlikely in the current timeframe, isn't it? I mean, I know it's important to keep the diplomatic channels open and keep talking and regardless of what happens there are going to have to be conversations between Dublin and London and all that, but getting a deal so the UK can leave by the end of October, which is three weeks today, and the ratification that's necessary for that and all the rest of it, still seems vanishingly small.

Chris Mason: It was 0.2 this morning!

So two of the BBC's very own top Brexit brains were repeatedly telling each other - and us - only last Thursday that "there was a vanishingly small likelihood of a deal", with Katya Adler going so far as to put a figure of 0.0-0.3% per cent on its likelihood.

Indeed, on the previous week's episode Katya had said (to murmurs of agreement from the fellow BBC Brexitcasters):

The current proposals on the table are not acceptable to the EU, full stop. Let's be honest about that. The chances of getting a deal now, between now and the EU leader's summit is zero, let's be honest.

Can Chris and Katya ever be taken seriously again?

Politics has been strange in the last two years. Never say never. A deal is not completely and entirely off the table in time. But it seems vanishingly unlikely that we are actually going to get into that position with the time left. It is only a matter of days since the Prime Minister put his new proposals on the table in Brussels and quite clearly they are simply not changing hearts and minds and they are simply not on course to be able to get to a conclusion.