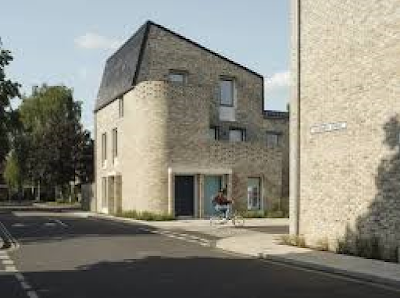 The BBC treat the RIBA Stirling Prize as an annual extravaganza where the great and the good of the architectural profession come together. In some respects it has a similar status in BBC’s world to the Turner Prize - a shortlist of six contenders with the winner announced at one of London’s leading venues amidst much sparkle and razzamatazz.

The BBC allotted a half-hour peak-time slot live on BBC 2, together with a short write-up on the BBC News website - incongruously to be found in the Entertainment and Arts pages. David Sillito presented the BBC 2 programme:

The winer was announced. The estate, called Goldsmith Street, is made up of almost 100 ultra low-energy homes for Norwich City Council. Much was made of the low-carbon design.

… ‘Goldsmith Street meets rigorous "Passivhaus" environmental standards, which means it "provides a high level of occupant comfort while using very little energy for heating and cooling", according to the Passivhaus Trust.’ …

Letter boxes are mounted on the outside walls of each dwelling to maintain hermetically sealed units, allowing them to adhere to strict heat recovery requirements. The properties are classed as affordable housing - rented by tenants - ie council houses. The layout reflects the established street pattern which in effect dictates a new version of back-to-back terraced housing.

The scheme has a whiff of ‘The Truman Show’ about it. It all looks too good to be true. Where are the broken-down cars, the wheelie bins, the graffiti, the sky dishes, the tumble drier vents, the multiple occupancy and overcrowding, the big-mac wrappers, the white vans, the bus stops, litter bins, dog pick-up bins and every other add-on that goes with a city centre development? Has anyone studied the effects on health of breathing recycled air ad nauseam?

There is something of Big Brother watching over tenants and about tenants’ suitability for living in low energy buildings such as these. There’ll be a long list of dos and don’ts as a part of any tenancy agreement. Possibly, only suitable tenants would be successful in being granted tenancies.

In a sealed environment, incoming sounds, smells, and even snatched conversations with neighbours are all excluded. Living in isolation is oppressive. Good fresh air through ventilation and feeling sunlight even when it’s cold outside are two essential basics for contentment - yet both are greatly restricted in these hermetically sealed boxes. Inside can become stifling and airless.

The BBC’s suggestion was that Goldsmith Street might became a blueprint for other cities - meaning London of course. I sensed that the coverage was only lukewarm. Surely, with a low energy sustainable solution such as this, the sky’s the limit.

The BBC News website article (as mentioned above on the Entertainment and Arts pages) was only on view for a short time - it was clear that something was wrong.

With some searching, I found out what might have been niggling the BBC:

... ’Ike’s principal specialism remains the public realm and he remains actively involved within this area on both a professional and voluntary basis. In 1998 he helped compile the World Squares for All masterplan and report on which the 2003 redevelopment of London’s Trafalgar Square was based. In 2003 he joined the St. Giles Renaissance Forum which advocated urban improvement strategies for the neighbourhood surrounding London’s Tottenham Court Road station. He has also prepared masterplans for major developments in Birmingham, Slough and High Wycombe. In 2002 Ike was elected the youngest trustee of the Hackney Historic Buildings Trust and he has been a member of the London Borough of Hackney Design Review Panel since its launch in 2007. Ike is a specialist on London architecture and urban design'. ...

The cry in towns, cities, villages and countryside alike in the UK has been: “build more council houses” for years now. How can it be that 100 ultra low-energy homes built for Norwich City Council can be considered ‘populist’?

If to be populist is to have been a Leave voter from outside the major cities, then this description is worrying because in the 2016 Referendum, the City of Norwich voted Remain (albeit within a strongly Leave-voting rural area of East Anglia). How far can the accusation of populism, coming from the London based critic of Building Design Magazine, extend? Or, is the criticism aimed at the judging panel for selecting the winner based upon ‘populist’ values. If the latter, what can be wrong with celebrating this development as a useful contribution, however small in the grand scheme of things, to solving housing shortages?

Goldsmith Street must therefore mean different things to different people - a dilemma for the BBC in their coverage of the RIBA Stirling Prize. To an architecture critic it means selling out to populism, to the eco warrior it means a solution to council housing which has the lowest of carbon footprints, and, to the silent majority IMHO it means council housing but at a cost - coming as it does with restrictions upon lifestyle and a required conformity that would deny basic choices. Take your pick!
Posted by Craig at 11:55