Brexit, Dark Money and the DUP 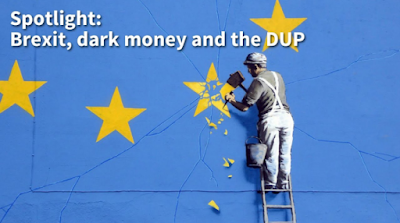 I was intrigued by a comment from Rich over at Biased BBC this morning which ran as follows:

The bBBC produced a much heralded, by them, piece of speculation that was supposedly cutting-edge journalism a while ago in the shape of a BBC NI Spotlight special.

This programme asserted that £435,000 donated to the DUP and used by them to back the Leave campaign was in their words “Dark Money” from a disreputable and illegal source and blatantly queried the integrity of Leave campaigners and supporters. At the same time this left the DUP as a party and as individuals open to claims of criminality, financial sleight of hand and of using “Dirty Money”. From, of all people, the bBBC and subsequently Sinn Fein?

Travel to Europe, lots of shots of piles of paper in dark and empty offices, empty assumptions, blatant innuendo and nothing more than hyperbole produced a programme that seemed only to be an attempt to undermine the validity of Brexit and to discredit the DUP. The programme itself left me asking both “is that it?” and ” so what? ” but the matter was referred to the Electoral Commission and was investigated.

Today they decided that the DUP has no case to answer and the donation was permissible under UK law.

The BBC News website had a report yesterday about the Electoral Commission's ruling, with the headline DUP's pro-Brexit advertising money was 'permissible' which confirms what Rich wrote. It begins:

The Electoral Commission has told MPs that it is satisfied that a £435,000 donation to the DUP was permissible under UK law.

And it goes on to say that the Electoral Commision had checked that the donation was not of foreign origin.

And yet if you go back and look at the BBC's original reporting of this - Spotlight: Brexit, Dark Money and the DUP (the original programme is no longer available but the title could hardly be more suggestive,, could it?) - you'll also find a write-up on the BBC News website which begins:

A BBC Spotlight investigation into the man behind the DUP's record £435,000 donation during the EU referendum has uncovered a trail of illegal activity and foreign money.

Did the BBC spectacularly misfire again here? Well, it certainly looks like it.
Posted by Craig at 16:59