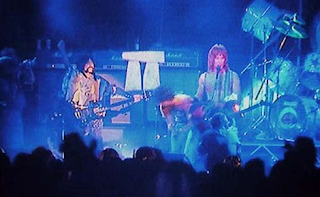 Well, I feel as if Samira Ahmed has dumped some very fake news on me.

We got close though. There was email from a certain Ian Gilmore - who, if you change his Christian name entirely and alter his surname, becomes Dave Gilmour of Pink Floyd.

And there was a Stephen Blakemore - who, if you change his Christian name entirely and alter his surname, becomes Ritchie Blackmore of Deep Purple.

But no. There were no famous hard rocker moaning about the BBC, as far as I can see.

What was Samira tweeting about? Was it just clickbait? Or have I missed a famous celebrity in my mist?


Had a Newswatch moment today when I thought I was reading out a viewer email from the lead singer of Whitesnake. Wrong Ian G. Disappointment.

It turns out she got it all wrong on many, many levels, confusing Deep Purple's Ian Gillan with David Coverdale, originally of Deep Purple and later of Whitesnake. "Oh no, I’m doubly disappointed now. And confused", tweeted the Newswatch and Radio 4 Front Row presenter later.

Should I complaint to Newswatch about this?
Posted by Craig at 21:15