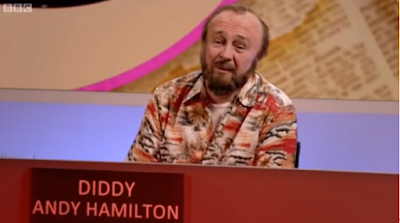 A tick-list from journalist Charlotte Gill for last night's Have I Got News For You:

She wasn't entirely right. There was a joke about Diane Abbott's counting ability, but otherwise that's pretty spot-on.

As for targets on the Brexit issue, another tick-list could be drawn up and would show that the 'anti-establishment' Ian & Co. only mocked Brexiteers.

At least the show tackled the big BBC controversy of the week, Cleavagegate. And Andy Hamilton even got to crack a traditional BBC comedians' joke about Michael Gove. (Hurray!). Bandages at the ready folks, lest your sides actually split:

DAVID MITCHELL: And how has the BBC upset people this week by censoring something?

PAUL MERTON: There was a documentary, I'm not quite sure about the details, a documentary that was being shown in Africa and there was a bit of pixelating going on?

DAVID MITCHELL: Yes, producers of a BBC Africa documentary decided to blur out the cleavage of a female interviewee. Let's have a look at what we can. Yeah. 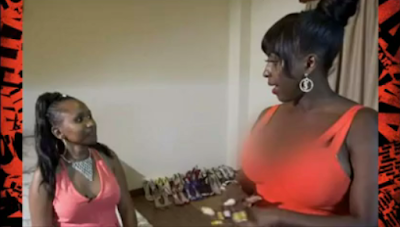 DIDDY ANDY HAMILTON: Is that because the cleavage was involved in a court case?

DAVID MITCHELL: BBC bosses said they felt the need to cover up because they were worried it would offend audiences in some conservative African countries. According to an internal BBC e-mail, "The decision to deal with Pam's cleavage was made at senior editorial level".

DIDDY ANDY HAMILTON: And that would be the Head of Cleavage. HOC, as it's known. Can I just say, the other lady's cleavage is quite low. I don't understand quite what the parameters were there.

IAN HISLOP: Are you pitching to be HOC?

DIDDY ANDY HAMILTON: In that opening sequence, where Michael Gove was running, you could quite clearly see his man-boobs. And I think they should have been pixelated.

I note there were no Daily Mail jokes this week. Rumour has it that all BBC political comedy panel shows have been required by the BBC Charter for at least two decades to make jokes about the Daily Mail. In fact, Daily Mail (and Michael Gove) jokes have been the only thing keeping some BBC comedy panel afloat for years, and now they can't make them any more because the Daily Mail is no longer evil. I can see programmes like HIGNFY going out of business soon.
Posted by Craig at 08:05